The bad news is that the virus is more infectious than its previous two avatars; the good news is that it is distinctly less lethal.

Iqbal Singh Chahal, Mumbai’s top administrator, confirmed to me that the recovery, especially among those vaccinated, is taking place mostly within five days, as opposed to the 14- to 16-day period that the Delta variant took up. Thus far, the need for ICU beds and oxygen has also been limited.

Yet, in 2022, we have responded to the third wave with some of the same measures—and mistakes—as two years ago.

The night curfews and weekend curfews are especially galling. They are galling, first and foremost, because of the staggering political hypocrisy. Politicians are locking their citizens in, while proceeding with mass rallies themselves. Not just is this mixed messaging, it is dishonest and unethical. It is also the worst sort of deja vu because of the failure of the Election Commission to show a more proactive intervention against these mass gatherings. 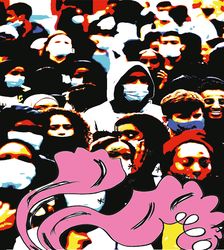 But the scientific basis for the restrictions is also extremely dodgy. If Omicron is in community transmission—which it clearly is—curbing social activity on select days or hours is not going to stop it. In fact, it only ends up hurting the economy and lives and livelihood for no significant, achievable gain.

Institutional quarantine or hospitalisation is mindless. Shefali Manilal, a French citizen of Indian origin, arrived in Delhi to meet her mother. On arrival, she tested negative. A few days later though, her 11-year-old son and she turned positive. But both mother and son were entirely asymptomatic. Yet, an official ambulance forced them into a private hospital for several days. “Is this not a waste of hospital beds and doctors’ resources?” Manilal lashed out, in an interview with me.

She is absolutely correct. If anything, there should be clear communication from state authorities urging people not to rush to hospitals. The one thing that can make the health system collapse is if a huge section of frontline workers test positive and are pushed into fortnightly isolation. Given that most Omicron cases are mild and can be managed at home, hospitalisation must be done extremely sparingly.

It is time to reimagine Covid-19 protocols as we know them. Dr J.P. Muliyil, leading epidemiologist at Christian Medical College, Vellore, and also a member of the government advisory task force on Covid-19, told me that “asymptomatic patients and those with mild symptoms should not be encouraged to test”. This variant, he argued, is a “gentlemanly virus” and one that is, in fact, offering a shield against the much more lethal Delta.

The argument is not to go out and get infected, or to be cavalier or callous. But as we watched the United States hit a million cases in a single day, we could be looking at that sort of steep spike here as well, with accompanying panic and a rush for hospitals. It is this that would break the system again.