It took a week of national outcry before Ashish Mishra, accused of mowing down farmers in Lakhimpur Kheri, was arrested. Every single retired police officer of consequence called out the Uttar Pradesh Police for the bewildering delay in issuing summons to the son of Union Minister Ajay Mishra, given multiple eyewitness testimonies and chilling videos that captured how the elderly were among those crushed under his vehicle.

Ajay has continued to deny that his son was present at the site. But multiple voices from the ground have testified to watching Ashish run into the sugarcane fields. Some farmers have provided detailed accounts of why they believe the minister’s son was both armed and drunk. On camera, there are images of ammunition and what appears to be the debris of a weapon. A 14-year-old is among those who watched his father being run over by the speeding Thar.

Among the first to be hit, while he unsuspectingly walked, flag in hand, as part of the protest against the new farm legislations, was Nachattar Singh, an elderly Sikh whose son is a soldier. Despite the fact that the minister is also named in the FIR, he has neither been arrested nor asked to resign. 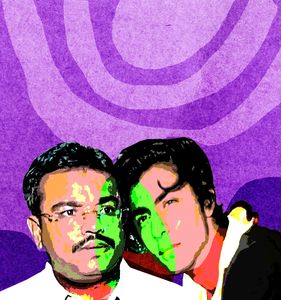 By contrast, another son, in another city, Aryan Khan, in his early 20s, was almost instantly taken into custody after being at a cruise ship party that was busted for drugs. Khan has neither been accused of trading nor of possession. The Narcotics Control Bureau has cited messages on his phone that indicate consumption. Certain circumstances of his arrest are also shrouded in mystery and dodginess. For instance, we now know that the two men who appear on camera escorting Khan and a co-accused, holding them firmly by the arm away from the glare of cameras, are not cops or security bouncers. One is Manish Bhanushali, a BJP worker, and the other is K.P. Gosavi, a private detective. Gosavi’s online pictures have him posing with a gun like a B-grade movie villain. He has also been identified as the man who took a selfie with Khan while he was in custody. Gosavi has since absconded.

Shah Rukh Khan has already been dropped as brand ambassador of educational technology company BYJU’s in the wake of the controversy around his son. And depending on what happens to the case, more brands could follow.

I am not making the case that Aryan should not face the requisite punishment for his violation of the law. But the alacrity and firmness with which the law was applied to the mega star’s son is in stark contrast with what happened in Ashish’s case, even though the crime is much more egregious in the latter.

In one case, the father has begun to feel the monetary consequences, albeit the fact that he is too wealthy for it to matter financially. In another case, the weight of the government is so far behind him.

This tale of two sons—and two fathers—is a modern day tale of India.