No country for poor men

If there is one takeaway I have from the nearly 50 days I have now been on the road, travelling through states as varied as Rajasthan, Madhya Pradesh, Uttar Pradesh, Delhi and Haryana, it is this: India has treated 45 million of our fellow citizens as if they are invisible.

From the first day of being on the ground and reporting this pandemic, the lockdown and its consequences on our poorest, most marginalised people, I have seen a staggering amount of insensitivity and even denial when it comes to our migrant workers—those who work in the cities, but live in the villages. 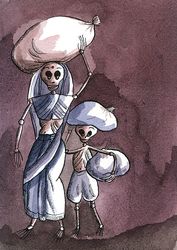 In the beginning, the lockdown failed to anticipate the mass exodus of the workers. They did not have enough social or economic security to stay where they were, and when they tried to leave, all at once, we blamed them, as if poverty was their crime.

On March 31, the government told the Supreme Court that there are no migrants on the road. Twenty-two days after that, within the span of a week, on four national highways, in four different parts of the country, I met with men, women and children walking on the road. Some children walk barefoot. The women carry clothes and utensils rolled into sacks on their heads, as if the burden of the universe is upon them. And, the men take turns to carry the infants in the group on their shoulders. I have met labourers from potato and cumin farms, blanket weavers and factory cleaners. All of them have told me the same thing: “If we had not moved, we would have starved.”

This week, I met a group of men who were trying to cover 1,100 kilometres from Panipat in Haryana to Aurangabad in Bihar on bicycle. “Our lala (employer) refused to give us paisa (money),” the men said, sharing how they spent nights under the open sky, right on the road, when the police permitted and did not kick them out. They had left home with biscuits and water, but that had run out. They did not have any idea where the next meal would come. “We would have died from hunger. Our lala did not give us even a day’s money after the factory was shut.”

In Morena, Madhya Pradesh, I met with the family of Ranveer Singh. He worked at a small restaurant in Delhi. He was walking the 250 kilometres home when his chest started to tighten. He decided to halt and spend the night at the railway station in Agra. His last phone call to his family was a plea: “If you can come and get me, please, come.” By the time the family was able to organise a curfew pass to take their vehicle out, he had died.

In his village, a sister, a wife and three young daughters, including a child with polio, stare ahead at an uncertain future. When we debate the issue of migrant workers, we treat it as an abstract; we forget there are flesh and blood tales of struggle and tragedy here.

Perhaps we look away from these images of our citizens walking our roads because it makes us uncomfortable. Perhaps we are shaken that evacuations are being planned for stranded Indians across the globe and buses are being chartered for stranded students, but no one is even talking of millions of our poor.

And, perhaps, it is time for us to be uncomfortable.