Home Minister Amit Shah insists that the citizenship amendment legislation is not against Indian Muslims. He argues that it only makes Indian citizenship faster and easier for persecuted religious minorities in three Islamic nations—Afghanistan, Bangladesh and Pakistan—and hence, by definition, cannot include Muslims.

But to understand why the new citizenship rules are blatantly anti-Muslim, you need to look at it in juxtaposition with the BJP’s next big project—a national register of citizens or NRC. Shah has vowed that the NRC will rid India of all “infiltrators”. 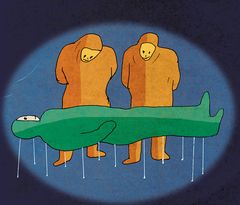 But are we suggesting that only Muslims are “infiltrators” or illegal migrants? If you decode how this may work on the ground, we are looking at a situation where mostly—or more likely—only Muslims will end up in jail or detention camps. When you combine the new citizenship laws with the NRC, Hindus, Sikhs, Christians, Parsis—basically anyone but Muslims—will be able to cite persecution in their home country as a legitimate reason to stay on as Indian citizens. The onus will then be solely on Muslim migrants, many of whom have lived in India for decades, some of whom have even served in the military, to “prove” their Indianness or face being branded as outsiders.

Many believe that the citizenship law became a political imperative after the absolute mess of the NRC experiment in Assam. Reports suggest that of the 19 lakh people who were not able to legally document their Indianness, nearly half were Bengali Hindus, an important electoral constituency for the BJP. Now, with the citizenship legislation, the Hindu groups can say they are a persecuted minority, leaving the Muslims to prove that they belong to this land.

Ironically, the sharpest protests to the citizenship legislation have been in the northeast, where the BJP has been forced to create pockets of exemptions where the law will not apply. This is because the close proximity to Bangladesh has created a fear among indigenous communities that they will be overrun by migrants from Bangladesh—Hindus and Buddhists among them and not just Muslims alone. It is an instructive lesson for the government, a reminder that India is a diverse country and ethnicity, region, language are all just as emotive as religion can be. It is a reminder that what was not broken did not need fixing, and that these twin projects of the BJP are terrible ideas for heterogeneous India.

If the BJP is really interested in upholding India’s reputation as the larger neighbour with a civilisational history of assimilation, we should open our doors for all persecuted groups—Ahmadiyyas of Pakistan, Rohingyas of Myanmar and the Tamils of Sri Lanka. There is no logical explanation for why the government chose to focus on three Muslim nations of the region.

There is also the question of what this signals to our Muslim citizens. When they see a religious filter being placed on migration and their faith being pushed down on the hierarchical totem pole of citizenship, will they not feel less than equal? Why should refugees be organised on the basis of religion?

In 1947, we accepted the painful inevitability of partition; we never accepted the two-nation theory. We never believed that India was a country for Hindus above other religions, and that Muslims could go seek refuge elsewhere.

The very idea of India’s constitutional nationhood is sullied by the twin projects of the citizenship legislation and the NRC.

The next battle for India’s future will be in the Supreme Court.