In terms of mainland domestic political opinion (as distinct from the response in the Kashmir valley), the Narendra Modi government’s decision to abrogate Article 370 initially scored well. Even those who did not support the BJP, gave their thumbs-up to the formal removal of a hollowed-out autonomy, whose significance was more symbolic than substantive.

But one month later, we must ask the question: the government promised a new chapter for Kashmir, but is it still in command of the script? Has a gambit been made on the chessboard of political thinking without an endgame worked in? Has the withdrawal of Jammu and Kashmir’s special status ended up being about tactics rather than strategy? 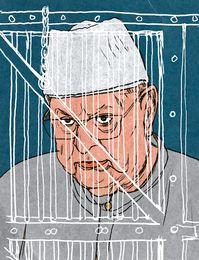 It appears as if there is extreme confusion over what the next moves in the Kashmir policy might be. And nothing captured this confusion more than the detention of former chief minister Farooq Abdullah under the Public Safety Act. Abdullah was under house arrest all these days. But as his colleague and friend Vaiko went to the Supreme Court demanding Abdullah’s release to attend a public function in Tamil Nadu, the administration had to apply the much more draconian provision.

Now, Abdullah can be criticised for many things. In his political life he has been confronted with corruption allegations, the display of non-serious behaviour and occasional inflammatory rhetoric. But exactly this could be said about many politicians in other parts of India as well. What cannot be denied is that he has stood with India over many decades of turmoil in Kashmir.

Under P.V. Narasimha Rao as prime minister, in 1994, Abdullah accompanied Atal Bihari Vajpayee and Salman Khurshid to Geneva to make a passionate Kashmir case for the country at the international stage. When Jaish-e-Mohammad chief Masood Azhar was to be released from a Jammu jail in exchange for the safety of passengers onboard the Indian Airlines flight IC-814, it was Abdullah who opposed the Vajpayee government most vociferously. He argued—and has been proven right—that it would be a fatal mistake. Today Azhar lives with impunity as a free man in Pakistan, while Abdullah is in jail. That is an irony that cannot make any sense. Most recently, at a BJP-organised event to commemorate Vajpayee after his death, Abdullah roared unapologetically, “Bharat Mata ki jai”, to find himself heckled and jeered for that moment by hardliners in Srinagar.

If anything, Farooq Abdullah, more than any other politician from the valley, was the living example of Kashmir’s “integration” into the rest of India. To put him away under a law that permits detention without trial for up to two years shows the lack of a plan and the first signs of panic.

The Kashmir situation is complex. Over the past month, I have forcefully argued against the stereotypes and cliches in much of the international media. It is important for the world to know that during times of turmoil, internet and data have been weaponised by militants and separatists. Ongoing security operations have sometimes been hit by the live-streaming of such stand-offs that are then used to mobilise crowds at the site of action. Contrary to perceptions and misinformation, there is no curfew order in place in Kashmir. And, there are real threats from militants on the ground against people who may be looking to resume their routine life—as we saw from the attack on apple traders in Sopore.

So, how does it make sense to embolden jihadists by targeting elected Indian politicians? The detention of Farooq Abdullah is not about his virtues and flaws as a politician. It is about the message. And, the message is handing over the advantage to the secessionists instead of those who stand with India.