Lessons from the defeat

Is the Congress finally getting ready for life after the Gandhi family? Or will an all-too-familiar drama of sycophancy and emotional blackmail play out in favour of status quo?

For Rahul Gandhi’s own sake I hope he sticks to his decision to step aside. For those who say that the Congress would fall apart were Rahul Gandhi to step down as party president, I would say, you are only highlighting its structural and existential crisis with that claim. 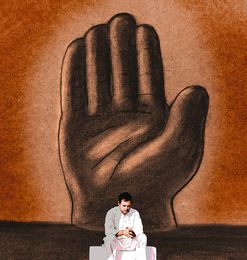 The issue is not dynasty alone. Although in a polity that is increasingly presidential, Narendra Modi’s self-made story as the son of a tea-vendor is a much better script to market than the inherited power and elite pedigree of the Gandhi family. But yes, the BJP has its share of dynasts too. New data released by Gilles Verniers and Christophe Jaffrelot reveals that 30 per cent of India’s new MPs are from political families; 31 per cent of the Congress candidates and 22 per cent of the BJP candidates were dynasts. So yes, there is perhaps no straightforward or simple conclusion that can be drawn on the impact of dynasty in the polls.

The larger issue is of leadership—and of entitlement. And, whether voters believe that you are willing to work 24/7 as an expression of commitment to your people.

Take how Rahul Gandhi has responded after the staggering defeat to Smriti Irani in Amethi. If I were him, I would have made sure that I was in Amethi the very next day, at the very least to thank the voters who had stood by me. And to apologise to those who switched perhaps because they doubted the integrity of my engagement. In this, he needs to learn from his opponent Irani who did not stop her engagement with Amethi even after her defeat in 2014.

Instead, the Gandhi family took the people of the so-called ‘family bastion’ for granted. Rahul would leave the bulk of the campaigning to his sister, Priyanka, who in the past (before she became general secretary) even quipped about being a ‘barsaati mendak’ (seasonal frog) in Amethi. More than dynasty what has gone against the Gandhi siblings is their assumption that they still have the cache to evoke old-style loyalty. It is this entitlement to power that the people have reacted against.

There is another ‘dynast’ whom the Gandhis could learn from. His name is Jagan Mohan Reddy. His sweep of Andhra Pradesh should make the Congress leadership kick itself for virtually ousting Jagan from their fold. But the instructive thing about the Jagan campaign has been how he has been able to shrug off the charge of entitlement. And that is through sheer hard work. His padyatra kept him in the state most of the year, enabling a mass contact with people. No one called him either elite or undeserving because they could see how hard he worked.

By contrast, the Gandhis seem like part-time politicians with other lives they return to. Work-life balance may be a millennial aspiration. But there is no space for it in new age politics. Look at the BJP and Modi. Even after winning a mega mandate, the party has not spent one day resting on laurels. Even before the new government could be sworn in, the BJP has been obsessed by its ‘Mission Bengal’. Sensing an opportunity, it has relentlessly courted workers and legislators of the Trinamool Congress and has gone for the kill.

Modi and Amit Shah are in permanent campaign mode. They never appear to take their victory for granted. The problem of the Congress is complacency and the smug belief that its values make it superior.

In elections, that verdict rests with the people.