Why I think soldiers should not be netas

Recently, BJP president Amit Shah began the party’s mass contact programme (to mark four years of the Modi government) from the house of former Army chief General Dalbir Singh Suhag. The outreach is part of the BJP strategy to personally connect with at least 1,00,000 eminent citizens from different walks of life—military, judiciary, literature and so on. From the BJP’s point of view, it is a sound strategy to build connections with public intellectuals and influencers. It is a glimpse into the BJP’s ever-evolving election machinery under Shah.

But the formal launch of a political campaign from the home of a former military chief led to the inevitable speculation: would General Suhag follow the example of two other ex-chiefs—General V.K. Singh and General J.J. Singh—and take the plunge into politics?

Like his colleagues before him, General Suhag has done the uniform proud. Lithe and courageous, he led his men and women from the front. A third generation Army officer and son of a retired subedar, the General led the surgical strikes against Pakistan in 2016. I have enormous regard for him and his predecessors. 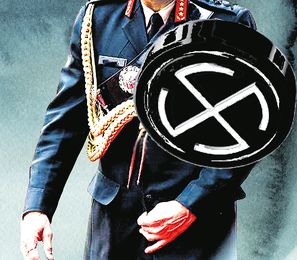 Perhaps, General Suhag was just receiving a friend or a public personality at home, and there is no political meaning in it at all. Yet, the picture had me grappling with an old conflict that remains unresolved. Do we really want to see our soldiers entangled with politics and politicians, of any party? At one level, we cannot act as if our soldiers live on an island; like everyone else, they have the right to their affiliations and views. Yet, survey after survey will show you that the one institution considered above the fray is our military. It remains trusted, revered and credible in increasingly polarised and argumentative times.

Last month, I wrote about how it was the mandir-masjid-gurudwara traditions of the Army from which we could get a new model of genuine pluralism. When this country agrees on precious little, it agrees on the soldier and the izzat (honour) she or he is entitled to. I think a man (and in the future, a woman) who has been chief of Army staff has already held among the most cherished positions in the country.

When I saw General J.J. Singh, a friend and lively raconteur of stories, campaign for the Punjab elections, I wondered why he would want to be an MLA after he had been Army chief. Of course, General Singh didn’t agree with me. There is a sense in the military of having been cloistered and kept away from critical decision making. Perhaps that explains why some soldiers are drawn to electoral politics. Maybe they feel they will finally have an unfettered voice in the system. Or, maybe the interest in politics is because different governments don’t use the expertise and experience of retired soldiers in governance and administration, where they still have a lot of energy and wisdom to offer.

But, I think there is an important distinction in a retired chief working with the government of the day as an envoy, interlocutor or adviser and in him contesting elections to assemblies or Parliament. The latter, I believe, draws the soldier into an avoidable partisanship. I also think military values—of discipline, dignity and equality for all—contradict political values, which are rooted in machinations and divisions.

Some of our best chiefs have been apolitical and yet valuable voices of reason in the nation’s public discourse, like General V.P. Malik, who worked closely with the Vajpayee government as chief of Army staff and under whom we won the Kargil War.

I don’t know about you, but I would be happier if our generals remained soldiers and never became netas.