Picture this. A young girl in lane six at the start of the semifinals of the 400m race of the recently held Commonwealth Games in Gold Coast, Australia. Golden streaked hair. Utterly confident. Not a trace of nerves. The introductions are on. She looks into the camera as if she owns the place, rhythmically waves with the peace symbol, almost Usain Bolt-like. The race starts, and she finishes third with a personal best time. She gets into the final and finishes sixth with yet another personal best. She is Hima Das, 18, one of India’s brightest athletics prospects. The Assamese girl burst on to the national scene at the recent Federation Cup. With two consecutive personal bests at the CWG, Das is part of the emerging face of Indian sport.

Then there was the striking 22-year-old Manika Batra, who won three medals in table tennis. Sporting tri-colour nails, and oozing confidence, she won the gold in the women’s singles, beating top-ranked Singaporean Yu Mengyu in straight games.

What about the stunning performances of 16-year-old Manu Bhaker and 15-year-old Anish Bhanwala, who won the 10m pistol and 25m rapid fire pistol golds respectively? Our young guns were firing on all cylinders in Gold Coast. 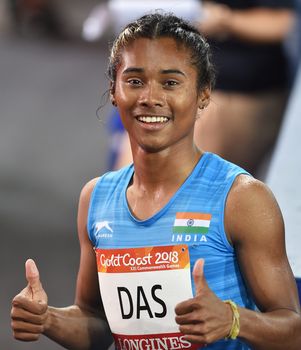 We won the mixed team badminton gold beating Malaysia, which was a stupendous achievement, given that Malaysia had won the last four editions. We even won the table tennis team gold, another unbelievable performance, beating Singapore in the finals.

It was a gold fest for us in Gold Coast. We won 11 more gold medals than Glasgow 2014. And, we won them in style. Neeraj Chopra, 20, whose javelin travelled 86.47m, was at least 4m ahead of the competition! In a thrilling all-India final in women’s badminton, Saina beat the fancied Sindhu, showing that the older players still had that fire in them. Tejaswini Sawant, Heena Sidhu and Shreyasi Singh—all won gold in their shooting events, as did Mary Kom in boxing. They showed that time had not dented their desire to win.

There were many performances that left me with hope that Indian sport is now starting to blossom beyond cricket. Yet, our men’s hockey team left me scratching my head in disbelief. Prior to these games, Roelant Oltmans, a Dutch, was replaced by Sjoerd Marijne, another Dutchman. Marijne was the coach of our women’s team, and it was surprising to many as to why he was put in charge of the men’s team. Oltmans was able to build a cohesive unit that was performing consistently. His approach to team building was what set him apart. He was insistent on players being together beyond the field. Apparently, he collected a fine of Rs 500 if anyone came late for training, including himself. No wonder we are sixth ranked in the world.

In contrast, our women’s team outdid themselves under Indian coach Harendra Singh. They beat England, ranked two in the world. They gave Australia a run for their money, losing 1-0 in a tight match.

Clearly, Gold Coast 2018 belonged to our young champions. And, I see a fundamental shift in their approach to competition. Gone is the diffidence and the inferiority, and decades of closed-door policies post-independence. Our earlier generation was brought up on a scarcity mentality. Today, we live in a time of plenty.

The walls between us and the world have collapsed, and the younger generation has adapted well to this new reality. Everything from the Indian Premier League to Indian geeks have given us the confidence that we are as good, if not better, than many other nations. The journey from the fear of losing to the self-belief in winning is the real revolution taking place in Indian sport. All that is required now is efficient and clean sports governance to make India a world power in sport.