The waning of nationalism

I was brought up with a deep feeling of being Indian, as were many in my generation and the ones before mine. It is a feeling that is beyond doubt. The remnants of our freedom struggle were still strong in my time and I still carry that fervour of being an Indian. To represent India at the world stage was a privilege that I worked very hard for. It was of great value then to receive an Arjuna Award for excellence in my sport.

An award given by the country is to be cherished. Or, so I thought. Today, awards are bought and sold, even as national pride is swept under the carpet. There is a very different world emerging today. A world where nationality is fast eroding as a pillar of one’s identity. And, one can see that clearly in sports. There was a time when playing for the country was considered by most to be the ultimate feather in one’s cap. But, today, it is the private leagues that players and spectators identify with more. Football is a case in point. Players do not feel the same fervour playing for their country, as they do for their clubs. Messi is more FC Barcelona and less Argentinian. Ronaldo, more Real Madrid than Portuguese. It is only a matter of time before an IPL team becomes the pinnacle of a player’s identity, whether he be from the West Indies or Afghanistan.

An identity has value only when it provides the individual with a sense of security. That is why we identify with the country, our family, an organisation or with a religion. These are some of the main pillars we rely on to build stability in our lives. But, when experiences go contrary to what we desire, and, when there is instability, we start questioning that identity. Especially, when that identity starts getting diffused and has no common, shared understanding. Nationalism is proving to be one such primary means of identity that is losing its relevance. 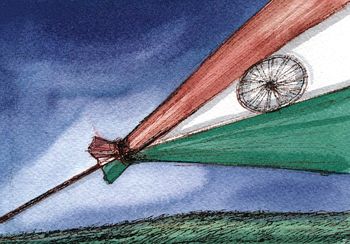 At the heart of keeping the idea of India alive is a shared understanding of what it stands for. But, that shared idea is getting diffused. Each of us has our own agenda to fulfil. A few people in power make hay while the sun shines, to the detriment of those who elect them. The chosen few in power, the bureaucracy and the rich and famous play by different rules, while most of the citizens struggle through a totally separate set of rules. We bribe and get our work done.

We pay taxes, and there is little development to show for it. For 60 years, there was one kind of idea of India. Today, another idea of India is being pushed. There is no common understanding left anymore, of what the idea of India is. And, so, the value of our national identity is fast eroding.

This is happening not just here, but around the world. The US, with a demagogue for a president, is deeply divided on several fronts. As are many European nations. Brexit has shown how fractured the UK is. The large outflow of refugees from areas of strife and poverty add to the complexity of bringing about a common identity in nations where they settle.

Why is this happening? Technology has played a major role in rapidly spreading alternative ideas of the same identity. Man-made borders have also ceased to make sense in the virtual world. In this information age, there is an overload of views and counter-views that each must contend with. In this charged and volatile environment, keeping an idea stable is virtually impossible. Especially, the idea of a nation. Perhaps, nationalism is still secure in some of our villages, till, of course, the virtual world engulfs them.