The recently concluded Khelo India School Games threw up some remarkable performances. We found talent from places that never would have got noticed. A boy from Manipur won the badminton gold. Now, who would have expected that a badminton star would rise from the northeast? The sheer magnitude of talent that exists in the country is unfathomable, and, hence, a great source of hope for a sporting revolution.

Considering the magnitude of the event, it was remarkable how professionally it was managed. Athletes, coaches and officials were treated with care. I was thrilled that the participants travelled by A/C trains and stayed in three-star accommodation. I still remember travelling unreserved, sometimes two to a single berth, with officials travelling reserved for national events. I even travelled all the way to Patiala, sleeping near toilets, during my early days as a student going for the Indian camp. The National Games of 1985 was a nightmare with mosquito-infested rooms and barely enough food to eat. But, we were pleased to return home with medals to show for the misery.

The success of the event can also be attributed to the fact that the involvement of federations was kept to only their area of expertise—on-field technical support—while the rest of the event management was outsourced to those with relevant expertise. This is in stark contrast with similar events managed shoddily by federations, who have no expertise in event management. Then, there was live coverage of six disciplines of the games on Star TV and Hotstar. All in all, a wonderful start. Only a well-seasoned sports person would have understood the importance of all this. Congratulations to our Union Sports Minister Rajyavardhan Singh Rathore for pulling it off.

Khelo India is an initiative by the Prime Minister Narendra Modi to bring about a culture of sports at the grassroots. Modi tried this in Gujarat, and it is this model that he hopes to replicate across the country. Some Union government schemes have now been merged into the Khelo India-National Programme for Development of Sports. This includes spending on structured competitions for greater participation of youth, identification of talent, training the talent through governmental and private sports academies and the building of infrastructure in smaller towns. Khelo India programme has been allocated Rs 500 crore. In the coming years, this could rise to Rs 1,500 crore. Given the size of our country and the population, the amount would still be miniscule. 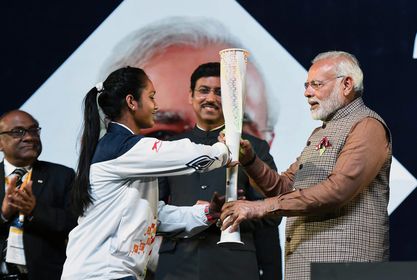 The immediate challenge that Rathore faces is to ensure that selected athletes get consistent nurturing that allows a considerable number to rise to the top. These athletes will be given Rs 5 lakh each as a financial assistance. It is a substantial amount, and a great encouragement for younger talent to take up sports as a career option. But, how are the athletes going to be monitored? What are the facilities and training that would be provided? This will be a challenge in the context of the current condition of the Sports Authority of India (SAI), which manages around 60 sports centres, and the respective state centres. A study in 2015, commissioned by the Sports Ministry, which I helmed, detailed the action that needs to be taken to improve these centres. Perhaps the recommendations of the report could help the new management at SAI to start a fresh course in-line with the vision of Khelo India.

The next logical step would be to follow-up soon with a Khelo India University Games. It is here that potential athletes for the Olympics could be found. Let’s hope that Khelo India is a game changer.