Heroism is alive and well. Fairytale finishes are alive and well. In a world full of fillers and filters and faux-reality like Moving in with Malaika and Keeping up with the Kardashians, drama in real life is alive and well. And in a climate of hate, negativity, cancel culture and divisiveness, good-old happiness, positivity and human warmth is alive and well. We all saw it, and felt it, and were touched by the 24-karat magic of it as it unfolded live on our screens from the Lusail Stadium.

Recently, at the Kolkata International Film Festival, Shah Rukh Khan shared the popularly accepted theory that negativity increases social media consumption, and thereby increases its commercial value. Which means basically that most people are more likely to click on a news article about a ghastly, grisly human tragedy (for example, husband kills children and wife, before turning gun on self) than an article about a triumph of the human spirit (autorickshaw driver’s daughter clears medical entrance). And so, if a news network wants to make more money, it makes sense for them to cover and run negative stories all the time. This negativity-sells theory is correct, but only up to a point. 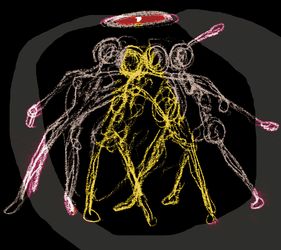 The fact of the matter is that it is much easier to slap together a crude, eyeball-grabby, no-brainer negativity-filled story that panders to the current political climate than create something with nuance, depth, genuine wit and universal appeal. The latter is more expensive, more time-consuming, trickier to pull off and requires actual talent and hard work. And that is the real reason why half these weird movies—the ones Amitabh Bachchan seemed to be condemning from the same dais—are being made in the first place.

So yes, crass negativity sells, but a well-written, well-directed and authentic film on a tiny budget can sell even better. And therefore a so-called ‘hit’ like The Kashmir Files (2022), starring Anupam Kher, will be forgotten in a year, but his Khosla ka Ghosla (2006)—one of the rare Bollywood films that bucked the trend by being remade in Tamil and Kannada, instead of vice versa—will be a classic forever.

Coming back to the FIFA final, what a celebration of positivity! So seductive that it sucked in people with absolutely no skin in the game, and no interest in football whatsoever, and didn’t let them move from their seats till the game was done. The delicious fact that it pitted two of the game’s greats, one rising, one long-reigning, who play for the same club against one another. The victors so deserving and so long denied; the vanquished pumping out a historic hat trick, not in the mood to surrender even an inch! Ballads should and will be written about the epic battle, the sweat, the tears, the shirtless swagger, the hands going to up the heavens in thanksgiving... ballads that will send dopamine coursing through the veins of the most negative of folk, inspire us all, and render the entire planet sunnier.

Toxic aunties of all genders can carp about the black-and-gold bisht that was draped onto Leo Messi when he claimed the trophy, but again, let’s focus on the positives here. The robe was an honour, a sort of coronation or knighting. Messi looked ‘awwww’some in it as he stroked the bald head of the World Cup trophy like it was his fourth-born, and it made him stand out a little in the team photos, in the manner in which a Hindi movie hero stands out from among the rest of the dancers during a song routine.

So yes, Shah Rukh was correct when he said negativity is click-baity, but positivity can be click-baity, too. We just need to find our inner Messi.