Our youth apathetic to injustice around them

The indifference of our young men and women is alarming

I am guessing that by now everybody has seen the viral video of the young Muslim student from Manipal Institute of Technology objecting to his professor “jokingly” calling him “Kasab” in the classroom. The appalled college, alma mater of Microsoft CEO Satya Nadella and a host of other global luminaries, immediately issued a statement of apology, and ordered a probe into the incident. On social media, the young student was mostly applauded for the stand he took, but I could not get over the entire row of (male) students sitting in front of him in that elite classroom. All of them were looking ahead stolidly, with their heads in their hands, doing an amazingly lifelike imitation of the three monkeys who can see nothing, hear nothing and say nothing. ‘I’m outta here.’ Their body language seemed to say, ‘include me out’ and ‘do not wanna get involved, boss’.

There were a lot of depressing things in that video—the young boy’s anguish, anger and disheartenment, the teacher’s weak apology and befuddlement at being called out for something as ‘normalised’ and ‘innocent’ as casual Islamophobia, the sniggers of the off-camera students, but the most depressing (and dangerous) thing in the clip is that row of indifferent young backs and averted young gazes.

Because if the youth of a nation are choosing to keep their noses clean, their opinions non-controversial and their CVs well scrubbed of any controversy, then where are we even headed, as a nation? 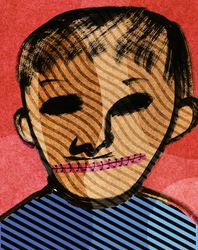 Which brings me to the other controversial opinion airer of the fortnight—Israeli filmmaker Nadav Lapid. Several scenes of his Golden Bear winning film, Synonyms, are so reminiscent of the resolutely turned backs and averted gazes of the Manipal students. In his official capacity as the jury chairman of the International Film Festival of India, Lapid stated that he and his entire jury were “disturbed and shocked by The Kashmir Files, a propaganda, vulgar movie, inappropriate for an artistic competitive section of such a prestigious film festival”.

The fact that this has got the RW knickers in such a red-hot-chilli-pepper twist tells us what a mela of monkeys our entire arts and culture scene has become.

And our diplomatic scene as well. Because the Israeli ambassador is now openly moaning on Twitter that while Lapid will go back home smugly thinking that he was “bold” and “made a statement”, the embassy will have to deal with the “implications” and the “state of their DM boxes” following this display of ‘bravery’ which basically means that the ambassador is petrified of being trolled by the bhakt brigade, i.e. the ambassador is basically a grown-up version of those boys in the Manipal classroom, sitting with their heads down, and their backs turned resolutely away from the madness that surrounds us all.

Now, the babus are scrambling around, trying to establish whose idea it was to invite this loose cannon Lapid, who has publicly stated, several times, that “it is an artist’s duty to bite the hand that feeds him” to IFFI? And appoint him as jury chairman, no less? Was he the cheapest? The most jobless? Or did nobody do any homework? Meanwhile, we have also got to worry about where-where in which-which international festival The Kashmir Files has been entered, and who-who could potentially take a dump on it. Which is problematic because knowing how ‘extra’ we are, we must have entered it everywhere.

Damn. This need for global validation and shiny, blingy international awards will be the downfall of
us all.

I know. We should forget about all ‘artistic and prestigious’, and simply start the world’s first International Propaganda Festival. The IPFI. Awards will be handed out to whoever best amplifies the government’s agenda. Instead of a golden peacock, we shall hand out a golden parrot.