Congressis who voted for Kharge should know what his plans are

The Congress has achieved the impossible. It has managed to lose an election in which both the candidates were from the Congress.

Don’t get me wrong—holding a democratic election to decide the next party president was a rare, refreshing and brave move by the party. It made them appear suddenly younger and sexier to the general public—who have no vote in this election, but are definitely keen to see the upholders of democracy practise a little of that within their own internal structure in a clean, transparent manner.

Seen from the point-of-view of providing the general public some entertainment, the clash could have played out like a celebrity tennis match—Hrithik Roshan vs Salman Khan perhaps, where the big boys come out to play and a damn good time is had by all spectators. But what ended up happening was Hrithik Roshan vs Alia Bhatt. And to make things worse, there were strong rumours that Hrithik was so scared of Alia that he sneakily pumped himself full of steroids. 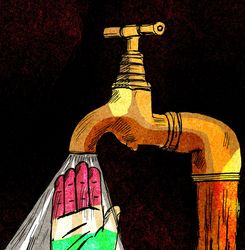 Instead, the big boys (and girls, if there are any left) of the Congress should have had the courage, and the commitment to democracy that Shashi Tharoor clearly has, to throw themselves heart and soul into a genuinely even contest. Ashok Gehlot could have contested instead of wriggling out, Digvijaya Singh could have contested instead of namby-pambying about it. Hey, it is a friendly contest between colleagues—there are no losers here and democracy is the only winner and our workers will be invigorated by watching us jousting about, right?

Still, we can draw some consolation from the fact that an election was held, at all. Of course the only reason it was held was because Tharoor was good sport enough to not withdraw in the face of likely defeat, and take it squarely on the chin instead. And he has definitely emerged as the first amongst losers. His 11.95 per cent vote share is more than any losing candidate has ever managed to get in an election for INC president, with Sharad Pawar in the runner’s up spot with a share of 11.9 back in 1997.

And the Congress finally has its first non-Gandhi president after more than two decades. Mallikarjun Kharge is a career politician, an MLA nine times over; a Gandhi loyalist, yes, but also a heavyweight in his own right and fully qualified to lead the Congress.

And the election process is addictive. Now that a precedent has been set, perhaps the INC will hold internal elections regularly, and at every level—after every general election. Hey, perhaps, even other parties will eventually be pressured to follow suit. Which is all good. Internal elections are sort of like deworming for dogs—they need to be done frequently in order to keep the body healthy and functioning and effective.

Now it is up to the Congressis who voted in Kharge to ask some hard questions of their elected leader on what his plans are for the party, going forward. Certainly the party is looking more dynamic than it has for ages, with the Bharat Jodo Yatra gathering more momentum every day. Perhaps, a Kharge-the-pragmatist and Rahul-the-idealist partnership is slowly emerging (a faint echo of the Nehru-Gandhiji model.) We have to wait and watch.

After casting his vote, Tharoor declared, “The revival of the Congress starts today.” As usual he was both catchy and correct. It remains to be seen, however, if this ‘revival’ is going to be a brahmastra of a beginning or a damp squib of a dawn.