Would somebody just sit Nupur J. Sharma down, play her Virat Kohli’s Maanyawar’s ‘Har tyohaar, India ka tyohaar’ ad on loop, and tell her that she is fighting a losing battle? We are Indians. We love all our festivals. We like to dance the garba in whirling circles, play with colors on Holi, watch out for the moon eagerly on both Eid and Karwa Chauth, and attend midnight mass on Christmas eve. We adore backless mirrorwork cholis, parsi borders, Kanjeevaram silks, Kashmiri crewelwork, Farshi salwars and Luckhnavi chikankari. We love kada prasad, biryani, plum cake and farsan.

In Dil Chahta Hai, Aamir Khan famously said of himself and his two besties “hum cake khaane ke liye kahin bhi pahunch jaate hain” (we will gatecrash any place for cake) and that can be extended, to all of us, into, we will gatecrash any place to celebrate. We are not faking it because we were “brainwashed by decades of the Congress party’s politics of appeasement”. If we were, then Jodha Akbar would not have been a super-duper hit. Our very soul is syncretic. 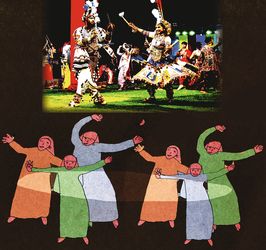 The most popular song at every garba pandal that I have ever been to, for the last 20 years has been ‘Dholi taro dhol baaje’. The effect is electric every time it plays—people rush to the floor in droves, whirling and clapping. Nobody ever stops to consider that it has been composed by a Muslim music director and features a Muslim actor. Salman Khan clearly had a blast dancing to it, and did a superb job, besides. He is an intrinsic part of ‘Dholi taro’, and it is India’s #1 garba song. (Except for ‘Chogada tara’, perhaps, which features a Muslim actress, is co-written by a Muslim lyricist, and is produced again by Salman Khan.)

And so it is laughable for Sharma to rule that Muslims may not join in and dance the garba till “you do ghar waapsi and submit to maa.”

The fact of the matter is that Indian culture is a rich tapestry of different faiths and traditions and peoples, a fabric that has evolved over centuries, which cannot now be torn apart and segregated into airless, airtight boxes by hate-mongers hoping to grab prime-time eyeballs by advocating a weird, sick policy of religious apartheid.

See, festivals, all over the world, are not just about faith or religion. They are also, very significantly, about community and celebration. And because in India we have such a wealth of faiths and traditions, we have managed, over the years, to perfect an intuitive, self-regulated system where people of other faiths fall back respectfully during the religious part of any celebration, but surge forward enthusiastically to join in when the festivities begin.

In fact, hosting people of other faiths during ones festive celebrations adds a certain extra zing to the whole tyohaar—you seek information about the significance of various rituals so you can explain it better to your visitors, you draw more intricate rangoli patterns than you otherwise would have, you put on your best ‘guest manners.’ It makes you proud of your identity in the nicest possible way, it creates a spirit of good-natured, healthy competitiveness and you score reciprocatory invites. What’s not to like?

There is no doubting the fact that this time of year, when the nip of winter and the thrill of festivity kicks in, is a time all Indians look forward to eagerly. The hate-mongers want it to become a time of stress and strife. But India, and ‘Dholi taro dhol baaje’ will not let them prevail.