It will create hyper-violent, territorial packs of dogs everywhere

For decades now, private citizens and civic authorities have jibbed against the banning of the ‘Hansel and Gretel’ solution regarding the street dogs menace. That is, if there are too many nasty noisy mongrels running amuck, just round them up, drive them far away, and release them in a place from where they can never find their way back to your township.

It is quite humane, they say. We are not killing them, after all. (Um, the only reasons you aren’t killing them left, right and centre is that the Constitution, which has a strong focus on animal compassion, clearly states no culling. And any issue regarding street dogs can be taken up only at the Supreme Court.)

But the Animal Welfare Board of India argues that it is entirely counter-productive to move stray dogs from their established territory. This is because when a pack of dogs is suddenly shifted from one area to another, the dogs that already live in that area attack the newly arrived pack, and there are ferocious territorial fights, the ripples of which are felt through entire cities, and which can lead to humans getting bitten, too. Meanwhile, in the area that has just been made empty, new packs immediately move in. Also, the government’s India’s anti-rabies programme goes for a total toss, because it is crucial to the success of the programme that dogs remain in their own areas to be systematically covered and vaccinated every year.

This is why, under Central law as laid out in The Animal Birth Control (Dogs) Rules, 2001, it is illegal for any individual, college, resident welfare association or estate management to relocate stray dogs. Instead, it is mandated that all stray dogs that belong to one area should be captured, vaccinated, neutered, clipped on one ear to show that they have been neutered, and returned to the same area from where they were picked up.

The department recommends that ordinary citizens then befriend these dogs, feed them regularly, and start thinking of them by their correct title, which is community dogs. As animals that are protective of their particular locality and the humans who live there—and sound an alarm if any intruders, human or canine, try to sneak in on their space. 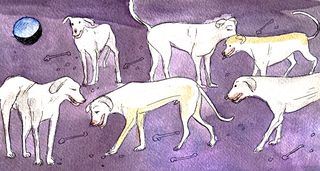 Unfortunately, nobody seems to be thinking in the long term. It’s all about now, today, ego satiation, having the last word. Which means that constant, vicious fights break out on colony WhatsApp groups, the new Kurukshetras and Haldighatis of our times, with bitterly feuding factions barking both for and against dog-feeding in a manner that would make real galli-ka-kuttas drop their jaws in admiration.

Recently, fuel was added to this constantly raging fire by a fake news report that the Supreme Court had passed an order to the effect that people who feed street dogs would be liable for all expenses and consequences if a street dog they fed bit anybody. Even though it was immediately debunked and subsequently retracted, people continued to share it, quote it and drive community dogs out of their established spaces on the strength of it.

See, Hansel-and-Gretelling the dogs (or straight out killing them, by mass-scale, brutal, vigilante culling) will only end in hyper-violent, territorial packs of dogs everywhere, spiralling hostility between man and animal, more bites, more rabies, sick, weak puppies at every side, garbage, filth and rats. What we really need to do is ensure civic authorities remove the garbage properly, and follow the mandated animal birth control measures. The next Supreme Court hearing is on September 28.