Forgiveness follows from repentance. When a mother disciplines a child, she does it so the child can mull over his/her actions, confess, apologise, and move on to a better place. That is good, constructive closure. That is what a good correctional system of the state seeks to do for all criminals.

If there is no repentance, there should be no forgiveness.

Even Manu Sharma, the intoxicated-on-power son of a Congress neta, who was running amuck in those long-past hazy days of the Congress era, publicly expressed regret in an interview for the obscenely entitled act of shooting celebrity bartender Jessica Lal dead because she wouldn’t serve him a drink after the bar had closed. And even after he had served his 15 year-sentence and consistently displayed good behaviour, he was released only after Jessica’s sister, Sabrina Lal, said in a letter to the welfare office of Tihar jail that she had no objection to his release. 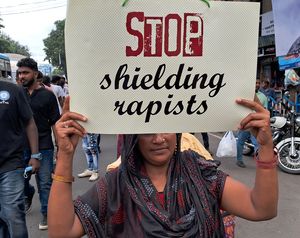 The film No One Killed Jessica was released in 2011. Its unflinching portrayal of Manu, his powerful politician father and his doting mother was approved without a single cut by the Censor Board of Film Certification under the Congress government. Jessica’s faith (Christianity) was a total non-issue in the entire incident. No Congress workers came forward to #boycott the film or protest that Manu Sharma was a Brahmin, and therefore had good sanskaars. At the 57th Filmfare Awards, the film was nominated in four categories and won one award.

Compare and contrast that with what is happening around us today. Acting in a manner that lays bare their heartless indifference to the agony of the women in the heinous Nirbhaya, Unnao, Hathras, Kathua gang-rape cases, the courts, the civil servants, and the state and Union governments of the day saw fit to allow the eleven gang-rapists and mass-murderers in the Bilkis Bano case to walk free on our 75th Independence Day.

Um... did they all—miraculously—show collective improved behaviour? Like all eleven of them?

Was Bilkis asked if she was good with their release?

No, of course not.

So did they write to her, plead revengeful anger, the ‘fog of war’, temporary insanity, or religious brainwashing? Did they apologise for smashing her three-year-old daughter’s head on the ground? Did they help her get the house she was promised in the final judgment but never got?

So did they at least slink quietly out of jail looking properly ashamed of themselves? No. They were received by the Vishwa Hindu Parishad, garlanded, fed sweets and seated upon a platform like they were heroes. It was even suggested that they never committed the crime at all!

And as surely as gangrene follows an open wound, a few days after their release, former BJP MLA Gyan Dev Ahuja boasted openly that “we have told our people to kill anyone involved in cow slaughter. We will get them bail and acquittal. We have done it for five people already”.

Of course, in a classic example of the doublespeak-theatrics that has come to define these times, he was booked for a hate speech, two days later. But the chilling message had been sent out, and received, loud and clear.

It feels like we are living in the first half of Sholay basically. Where Gabbars break out of jails and go snarling back to the homes of the men who had them put away, and extract a bloody revenge. That is what the optics seem to suggest anyway.

We are just a few weeks away from Gandhi Jayanti, and sure as lotuses are lotuses, the top Twitter trend of that day is once again going to be not #fatherofthenation, but #NathuRamGodseZindabad.

We have become assassin worshippers now.

Meanwhile, no commercial Bollywood studio is developing a film titled ‘No one Raped Bilkis’. They see no market for it.