All hail the birthday girl! Mother India is turning 75 and we, the loyal citizens, have been instructed to show our love and fealty by changing our display pictures to a picture of the national flag. We are also being urged to fly a tiranga from our rooftops. It is not mandatory, of course, so no presh. Except that there sort of is.

Now if you are the kind of person who immediately gets your back up if you are told what to do (obviously this doesn’t include entirely reasonable instructions like keeping your seatbelt on, or wearing a mask and so on), then you are in exalted company. Mohan Bhagwat and the RSS are yet to fly the tiranga from their DPs, with a senior functionary huffily stating, “We don’t take any decision under anyone’s pressure. If the display pic of our official Twitter handle has to be changed, it will be in due course of time.” 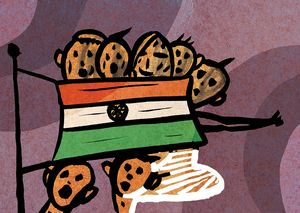 For once, I am in complete agreement with the RSS. I have flown the tiranga from my car, my house and my cubicle on August 15 in the past. (Mostly because excited little kiddies sell them at street lights and the whole interaction feels so festive and lovely.) Sometimes I have changed my DP, too. Doing so as a joyous spontaneous show of patriotism is one thing, and doing so out of a grim sense of duty is another—the latter has a non-consensual reek to it.

But, then, nowadays, we are getting told what to do a lot. Cancel this cricketer, donate to that relief fund, agree to X tax, surrender Y subsidy, avoid those people, worship this particular deity, boycott such and such film... Of course, these are things I may very well do all by myself (the Laal Singh Chaddha trailer looks seriously yawn-worthy) but you cannot take away my constitutional right to watch a crappy film if I want to. Or, not fly a national flag from my rooftop if I would rather not.

I am not a clueless child of mother India, I am a tax-paying, grown-ass citizen of the Republic of India. In Jane Austen’s Emma, George Knightley famously tells Emma, when she questions him on why he hasn’t shown his emotions for her more openly, “If I loved you less, I might be able to talk about it more.”I suspect a lot of Indians are like inarticulate George. Creatures of a simpler, more austere time. Soul-sisters perhaps of Cordelia, youngest daughter of King Lear, who upset her father by telling him that she loved him like she loved salt in her food. The flattery-loving old man preferred the fanciful, performative protestations of love made by her older sisters Goneril and Regan—both of whom tossed him out on his ass once they had got hold of all his money, leaving it to Cordelia to pick up his pieces and look after him, just like Salman Khan in Baghban. I suspect that a lot of genuine Indian patriots are watching appalled as Lear’s two older daughters take over the national discourse and taint our tiranga by turning it into the new bhagwa jhanda, appropriating it for toxic, one-tone jingoism on Twitter handles that spew hate and disunity.

Maybe, this August 15, these Indians will stick to the older, simpler tradition of just flying kites from the terrace, while listening to the old black and white deshbhakti ke geet. Because true love doesn’t demand a flag as proof. True love just is. Or, maybe, they will decide to not surrender the tiranga to the Gonerils and the Regans, and fly it from their rooftops anyway. Either way, they have the right to choose. That is what independence is all about. Isn’t it?