It is a bewildering and unfair world. Russia continues to brutalise Ukraine and hog the headlines, while ‘lesser’ conflicts in Yemen, Syria and Palestine remain largely ignored. Will Smith slaps a host at the Oscars and still remains eligible to participate and win next year. And in India we are in the middle of a particularly ugly month, with fasting Muslims being baited and humiliated constantly with the clear aim of making them lash out in retaliation so hysterical hashtags like #hindulivesindanger can trend yet again on Twitter—which is itself busy consuming poison pills to dodge a hostile takeover by Elon Musk who, I am naively hoping, wants to acquire it with the noble goal of just shutting down the whole damn shitshow.

Which is why I spent most of last week zoning out and happily consuming images of Alia Bhatt in her wedding clothes, the way I usually consume videos of fat-fat puppies learning how to walk, or videos of gurgling babies having their ribs tickled. 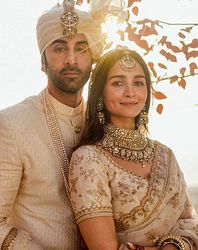 She is so wholesome, na, Alia. Intelligent and hardworking, too. And yes, her family is full of biggish producer-directors but so is Uday Chopra’s, so it’s not like all her success and fame is because of nepotism only. And she is short—just like most of us Indian girls, which makes her so much more likeable. And though I don’t fully approve of this old man she is marrying I am willing to go along with it because well, this world would be a much better place if we would all just tolerate our children’s choices and live and let live. I do hope she does not change her surname though—but again, it is none of my beeswax.

But the main reason why I am feeling so fond of Alia right now is that, along with being physically small, she has also had a small wedding. Like, really small. So small that the only Ambanis she invited were what’s-his-name and Shloka.

Not only was it a small wedding, it was also a home wedding. In the home garden, upon the home balcony. No Rajasthani fort. No Tuscan Valley. No Cirque-du-Soleil. No fifty elephants blowing rose petals from their fifty trumpets or stamping ghunghroos with their two hundred feet. Simple make-up. Traditional flowers. No vulgar excesses—and therefore, most importantly, no pressure on all of us regular folk with children of marriageable age to go sourcing how to have-what-she’s-having but at a cheaper price (i.e. after mortgaging our homes and selling both our kidneys.)

The tradition of small weddings especially during times of adversity is a long one. Back in the day, Princess Elizabeth used ration coupons to buy the material for her wedding dress. She also did her own make-up. Indira Gandhi got married from her father’s home in Allahabad, wearing a pale pink sari, woven out of cotton yarn that her father had spun on a charkha while in jail. (Imagine, the Ambanis could have just draped their brides in the first sari ever loomed at Vimal and called it quits!)

Of course it can be argued that Alia and Ranbir live larger-than-life lives every single day, so for them, a small simple ceremony feels unique and meaningful. But the rest of us live simple lives every day, and so the urge to splash out like a celebrity during a wedding is natural, even correct.

And then there is the argument that expensive weddings help revive crafts and support craftspeople—which is a valid one.

I guess I am making a case for the simple splash-out. A Goldilocks celebration—neither obnoxiously big (like the proposed Ram Mandir or the statue of Sardar Patel) nor ignominiously small (like the Congress party’s chances of winning anything.) In a world where over-the-top has thankfully gone from being a descriptor of weddings to a definition of streaming platforms, it is a happy new trend and worth embracing.