Anuja Chauhan on why the hijab ban will not work

In the last Olympics, the Norway handball team defied federation rules and paid a hefty fine so that they could play in cycling shorts, rather than the bikini bottoms which are the uniform for women’s handball. The Norway squad found the mandated attire sexualising, demeaning and impractical.

Similar issues came up with regard to the full length bodysuit versus the skimpy leotard in women’s gymnastics, with many contestants preferring the feeling of security and support the extra coverage provides.

Several Muslim women won medals while wearing a hijab at Tokyo, and wear whatever makes you feel confident and comfortable seems to the rule that is slowly emerging. 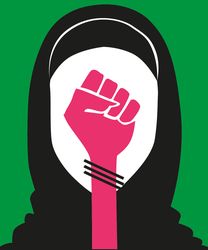 See, I am not a fan of the hijab. I do not see why girls should be forced to swelter inside one during the summer heat. But I am not a fan of people telling other people what they can or cannot wear either. And policing women’s attire seems to have gone from favourite sport to full-time occupation in a state which, to use Gauri Lankesh’s prophetic words, “is unfortunately and irreversibly hurtling towards its new position as the Gujarat of the south”.

Weird and wacky experiments are being conducted in what has come to be called India’s hindutva laboratory, on a daily basis, with ‘leaders’ like Anantkumar Hegde and Pramod Muthalik rising from the muggy, temple-dotted bowels of coastal Karnataka and spreading their noxious brand of poison nationwide.

After coming down on Hindu girls in pubs in Mangaluru and Bengaluru in the past for “wearing sleeveless, smoking and talking to boys”, especially on Valentine’s Day, these sinister doctors from the hindutva lab have now zoomed in on a garment which up till now was totally innocuous and completely accepted in mainstream society—as accepted as an auntie ji’s mangalsutra or a sardar ji’s pagdi.

It has been an aid to lovers’ meetings and all sorts of gentle skulduggery and sneaking around in many rom-com movies over the years, it has been openly defied in entirely non-controversial hit songs like 1975’s ‘Pardah hai pardah’. We see flowery ones and lacy ones and jet black ones billowing about on our streets all the time and feel nothing but affection or exasperation, but now the hindutva labs are trying to relaunch them as something sinister and divisive.

It is a stupid move, and it will backfire.

Because people have now figured out that if girls stop wearing hijabs to school, it will not benefit the nation. Just like a new temple or a new statue or a new name for an old stadium will not benefit the nation. These things do not make the GDP go up, they do not make unemployment, air pollution and deforestation go down, nor do they cause Rs15 lakh to magically transfer into bank accounts.

The only thing that will happen is that Muslims will have their noses rubbed into the mud (yet again) and many conservative Muslim families, who currently allow their girls and women to go out to study or work as long as they wear a hijab, will forbid them this financial and educational independence. Which is actually detrimental to the cause of nation-building.

Essentially, voters have finally recognised Hindu-Muslim polarisation for the cheap, fake trick it is. In Uttar Pradesh, 23-year-old Neha Singh Rathore and her ‘UP mein ka ba’ rap has taken the BJP’s big budget campaign apart with her head modestly covered and her ghoonghat firmly in place. And the girls of Karnataka will do the same with their hijabs intact.