We need more Wordles to bring the world together

It is crazy how Wordle has united the literate world. So much so that it can safely be re-christened Worldle. People of every nationality, age-group and mother tongue are bonding over a simple little word game created by Welsh software engineer Josh Wardle, 36, during the lockdown as a gift for his 32-year-old girlfriend because he knew she loved word games.

Perhaps it is this purity of motive that has made the little game such a big hit. Josh Wardle had not been trying desperately to ‘go viral’ or be ‘catchy’ or ‘on trend’ when he came up with his guess-the-five-letter-word-in-six-tries challenge. 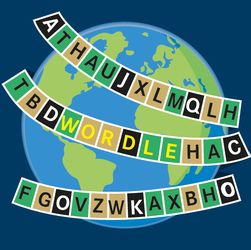 Just like Rick Riordan had not been trying to write the next bestseller when he wrote Percy Jackson and the Heroes of Olympus. He had just been trying to bond with his seven-year-old son, who had been diagnosed with attention-deficit hyperactivity disorder and borderline dyslexia. So, just off the top of his head, he made up a 12-year-old hero dealing with these very same issues, who was also the son of Poseidon the Ocean God and a human woman. His son loved Percy Jackson, so did more than 20 million people who bought the book worldwide.

Very similar is the story of Georgette Heyer’s breakout novel, The Black Moth, the romantic tale of a Georgian-era duke who was wrongfully accused of cheating at cards and became an outlawed highwayman. She wrote it at the age of 17 to amuse her convalescing younger brother, and ended up amusing millions of readers for over seven decades now. How Alice In Wonderland came to be written is also somewhat similar.

These examples are all personal favourites, of course, but the list of works of art and science that came to be, simply because of what I am calling an innocent motivation, is a long and extremely distinguished one.

Clearly, the human brain can think of amazing things when it is not frantically straining to crack the next big thing, Shark Tank style, or obsessed with identifying a gap and filling it, and is just focused on having fun.

What helps the fun is that Wordle is not trying to either steal your data or get you addicted. It asks you no intrusive questions and it keeps things classy by offering you a new puzzle only once a day.

In short, it is just the sort of chill, none-of-my-beeswax, non-stalkerish person everybody wants to date.

Of course, we, as Indians, also love the fact that the Mumtaz Mahal who inspired this Taj Mahal is an Indian named Palak Shah. We have immediately claimed bragging rights on her, of course, and made Josh into a honorary brother-in-law of sorts—right up there with Nick Jonas and Shoaib Malik and Boris Johnson.

And then there is the share option—a marvel of neat synopsising which shows the arc of the sender’s entire attempt clearly and concisely, yet does not issue any spoilers—thus immediately motivating the recipient to have a bash at that day’s Wordle, too. These days, when every shared forward is either a weird conspiracy theory or a hate-filled, racist rant, it is so nice to get something so uncontroversial yet smart in one’s inbox.

We live in a world that is both intensely polarised as well a hyper-localised—and playing Wordle gives us that vital sense of belonging to a larger global community which we all crave. It unites us all upon a low-friction, genuinely level playing field where literacy is the only required qualification. We need more Wordles urgently.