My name is Chauhan and I am not a tva-rorist.

What’s that, you may ask?

Well, as the White Knight said to Alice in Through the Looking Glass, it’s my own invention. Or rather, my own word, to describe the folks who like to end the old, familiar sub-continental word ‘Hindu’ not with ‘ism’ which sounds so soft-fade and perhaps even wimpy, but with a hard bitten-off, explosive ‘tva!’

Hinduism evokes Mahatma Gandhi and a gentle, inclusive, peace-loving, you-do-you, banks-of-the-Sindhu faith, with a huge, diverse pantheon of gods and goddesses and a divine Param Aatmaa who ignites all living creatures. 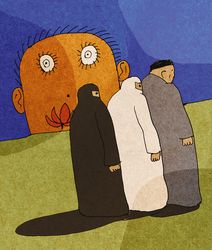 Utter the word correctly, and it will cause goosebumps to rise along your arms, blood to flush your cheeks, a sense of purpose to flood your enervated brain, and a quickening in the nether regions of your body.

Maybe Salman Khurshid went a little overboard when he compared it to radical Islamist groups, but like any evil Bollywood stepmother worth her salt would tell you ‘dekh rahe ho apni ladli ke lakshan?’ (‘Are you noticing your little one’s budding tendencies/traits/symptoms?’) Hindutva has all the ‘lakshans’ of Taliban/ISIS. The right-wingers can deny it till they’re as blue in the face as Lord Rama himself, but Hindutva is Taliban-Lite, as well as IS-Lite.

The telling people in great detail what to wear, what to eat, what to think, whom to love/reproduce with, coupled with brutal physical chastisements---murder, rape, lynching, burning---if these rules are not followed rigidly. It’s all there.

Hindutva worships blood and machismo, hindutva coaxes blood-red 165 crore flowers like Sooryavanshi to bloom, in which three Hindu supercops play judge, jury and executioner to Muslim criminals in the climax. (Hearing director Rohit Shetty compare the multi-starrer’s climax to that of Amar Akbar Anthony’s made me laugh out loud. Surely it must have struck his mind that if he had to make the point that there are ‘good’ Muslims as well as ‘bad’ ones, then it would’ve been much less complicated to name his hero not Veer Sooryavanshi, but Vatan Sulaiman?)

Which is why it’s so scary that a massive propaganda machine is glibly trying to persuade us, on a daily basis, that hindutva and Hinduism, are essentially Natha Singh and Prem Singh, one and the same thing. And that it is every Hindu’s core duty and dharma to follow this one true faith.

While the fact of the matter is that, just like the evil goblin in the Grimms Fairy Tale, who steals a real baby and replaces it stealthily with a pig, our real Hinduism (purged by our founding fathers of the scourge of untouchabilty and the caste system) has basically been #MoneyHeisted out of our arms and replaced with this gross, dross, tva thing.

Rahul Gandhi has recently started calling this cheap trick out, but who knows how long he’ll stick to his guns. Or to anything really.

So it is up to the Indian Hindus now. Just like we demand that Indian Muslims distance themselves from crazy fringe organisations and ‘prove’ their patriotism, just like we insist Indian Sikhs stomp out the separatists from their ranks, just like we want Indian Christians to stress health and education over proselytisation, so too we must demand that all loyal Indian Hindus prove their patriotism by culling the tva-rorists from their ranks.

See, if getting a country to rally behind one religion and one religion only were the secret to success, then by now Pakistan would’ve been a paradise for all practising Muslims. But it isn’t.

Plain vanilla Hindus are never gonna be good enough for the hindutva brigade. Because hindutva wants not just for a Congress-mukt Bharat, or a minority-mukt Bharat. What hindutva hungers for is a Hinduism-mukt Bharat.