I have just returned from the fifth edition of the Ooty Lit Fest, held every year in the picturesque Raj-era Nilgiris Library in Ootacamund. The organisers did a brilliant job, and topped the whole thing off by awarding a lifetime achievement award to historian Ramachandra Guha, who in his acceptance speech said many interesting things, and in answer to a question from the audience, remarked (ironically) that the current regime considers only one NGO desirable in India—the RSS.

No wonder taxmen have been visiting Sonu Sood’s office! The actor-turned activist had found a place in the hearts of ordinary citizens and popular culture, thanks to his generosity and pro-activeness. He helped stranded migrant workers find their way back home in the cruel summer of 2020, and organised medication and treatment during the second wave. The same man is currently being investigated for income tax fraud.

Your steely-muscled-tender-hearted hero has feet of clay and is an opportunist with political ambitions, seems to be the conclusion this government-approved persecution is meant to make us draw.

A similar thing happened in August 2017 when 63 children, sick with acute encephalitis syndrome, died in one single day at Gorakhpur’s BRD Medical College. The tragedy happened because piped oxygen was turned off by the supplier, which in turn happened because of non-payment of dues in spite of repeated pleas and reminders by the supplier, which in turn happened because approvals were not given by the Yogi Adityanath government. In the middle of this ghastly tragedy, one name had shot into the limelight, of a Dr Kafeel Khan, whose generosity and pro-activeness in that time of crisis was reported in glowing terms by the press. 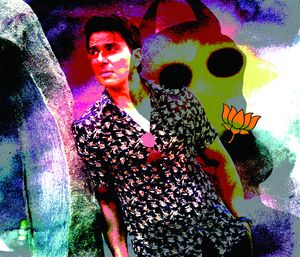 The backlash was swift. Dr Khan was besmirched and demonised overnight. He was charged with dereliction of duty and running a private practice, and a non-bailable warrant was issued in his name. Four years later, he and his family are still being persecuted.

The ‘crime’ both men have committed is the same. And it is a grave one. They have made the government look bad.

We do not believe in sharing the screen, GoI is quite clearly telling Sood. We believe only in single-hero, single-screen blockbusters with no uppity best-supporting role aspirants trying to steal the limelight or save the day. So, if medicines, or food, or aid is supplied by anybody else, it can bloody well just pile up on the tarmac. Anything that reaches our people should have only one photo printed on it.

It is also ironic that GoI’s diktat to Sood is that his paperwork should be as transparent as the shirts he wore in Happy New Year, but the workings of the PM CARES Fund (a fund we never even needed by the way, because we had a Prime Minister's National Relief Fund already) can be entirely opaque. And audited only by SARC and associates, headed by one Sunil Kumar Gupta who had a clear fondness for the BJP/RSS.

See I am not saying that Sood, or Dr Khan, or Greenpeace or the Missionaries of Charity, or anybody else, is above the law and should not be thoroughly audited by unbiased parties. But this twada kutta Tommy, sada kutta kutta attitude sucks big time. And has GoI really achieved such a high level of efficiency that it can afford to take this you-stick-to-your-job-and-let-us-do-ours stance with do-gooders from other fields?

Come on, GoI, don't be so insecure. Sure, Sood can rock a sleeveless vest. But only one man in India has a 56-inch chest.