Take your eyes off women athletes, all you morons: Anuja Chauhan

WhatsApp university forwards are always obnoxious. But some are first-amongst-equals, or obnoxious-est. And the one that claimed that honour, this fortnight, was something that did the rounds right after Mirabai Chanu’s incredible silver-winning performance at the Tokyo Olympics.

It basically stated (in chaste Hindi, and Devanagari script) that Chanu, Mary Kom and Manika Batra all have male coaches and managers, whom they trust, respect and obey without question, and that should be a lesson to all womenkind—that if you trust, respect and obey the men in your life, then you, too, will achieve worldwide fame and glory.

For the men who would immediately respond, hey don’t get mad, it’s just a joke, where’s your sense of humour, I would reply: well, for one thing, Larry Nassar.

This sexual predator and paedophile is currently serving a 176-year-sentence for abusing more than 300 girls and women, many of them while their parents were in the room, while he was the US gymnastics team doctor. He could get away with this abuse because those girls and their families trusted, respected and obeyed him without question.

If a Nassar can run amuck in the US, imagine (without any toxic pseudo-nationalism, please) what sort of returns a policy of blindly trusting, respecting and obeying would reap in India. And, why aren’t we even considering the possibility that maybe our girl athletes performed well because they happened to be more disciplined, dedicated and focused than their male counterparts? Just like they perform better in the class twelve board exams year after year after year? If it comes to that, how come we couldn’t even make a movie on the triumphs of the Phogat sisters without dragging her Bappu into it? Why, whenever our women perform well, do we immediately rush to reassure our men, that it’s okay, they only did it because the men in their lives (to quote Rahul Bose’s infamous dialogue from Dil Dhadakne Do) allowed them to? 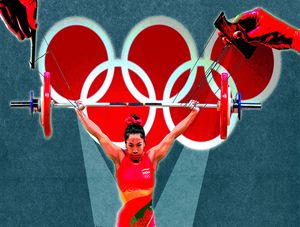 Women athletes are forced into tiny, sexualised bikini bottoms to play strenuous sport like beach handball, while their male counterparts get to chill in comfy shorts and tank tops. Handball is played in the sand. Sand is notorious for getting into crevices. How are bikini bottoms even a practical option? But when the Norwegian contingent flouted this rule, and opted for shorts that provide better comfort they were fined €1,500 each. Presumably for the crime of depriving male viewers a view of their bottoms.

The German women gymnasts, who feel more comfortable with their bottoms not hanging out of their suits to be ogled at, and so opted for ankle length leotards like their male counterparts, also faced flak.

Organisers routinely pitch into Serena Williams for her catsuits, her tutus and her on-court wardrobe choices. Some object when the clothes are too revealing, some object when they’re not. It seems like the officials and the male viewers just can’t seem to stop telling women athletes what to wear.

Why can’t they just focus on the sport instead? When a girl is risking everything, her spinal cord, her career, her nation’s hopes, when she is flying without a safety net, attempting to execute a freaking Produnova like Dipa Karmakar, say—running full tilt toward the table, launching herself into the air and flipping three times before her feet hit the mat—do you really want to be the moron marvelling at how cute her bottom looks? Or the moron claiming she achieved all this just because her coach possesses a pair of testicles?