It is time to reincarnate the Congress: Anuja Chauhan

I think it is safe to say that in India we don’t throw away anything. A T-shirt bought for the eldest child in the family will be worn by her, then by her younger brother, then by her younger sister, then by the 20 litre Bisleri bottle in the kitchen to keep it cool, then by the family dog, then will finally be cut down to squares to clean the window panes. Ditto any piece of furniture or electric gadgetry. We down-cycle and up-cycle all the time—Horlicks bottles, having done the job of growing our children into taller, stronger and sharper versions of themselves, serve for decades in the kitchen, holding haldi, ghee or various kinds of dals.

Biscuit tins hold money, threads or medicines. Army wives grow money-plant and nasturtium in ammunition boxes; we ripen mangoes in the cardboard box our mixer-grinder came home in; why, even our gods took the body of a child they had decapitated in anger, placed the head of a dead elephant on it, and made it as good as new again!

My mother-in-law once even, with infinite patience, deflated the balloons we ordered for my daughter’s birthday party, then blew them up and reused them again, for my other daughter’s party, six whole months later. Maybe it’s the Hindu belief in reincarnation that inspires us. We believe that nothing is beyond rescuing, that nothing is totally a lost cause. And that, with a bit of ingenuity, a minor financial investment, a lick of paint, and a kiss of love, nothing need ever be thrown away, and that everything can have a rebirth. 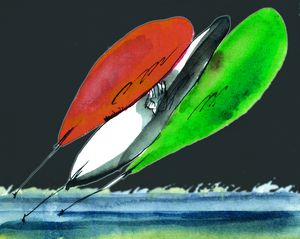 It is with this kindly, non-judgemental eye, this goal of taking dross and lovingly and ingeniously
polishing it into gold, that we need to take a hard look at the biggest piece of non-performative, rust-encrusted junk in our national backyard today—the Congress party. A lot of erstwhile Modi supporters, utterly embarrassed by how we’ve been made to look like yokels, buffoons and savages on the international stage, and appalled at the callousness, incompetence, arrogance, opportunism and utter disregard for the rule of law displayed by GoI on an almost daily basis, have finally started muttering about choosing the NOTA option come 2024. But NOTA isn’t going to cut it, folks. Much as we dislike the thought, we’re going to have to pull the INC out from the dustbin of history where we had deservedly chucked it, and try and make something of it, all over again. Perhaps with a good, clean, close-shave (the very thought of a beard makes one shudder nowadays!), some energy-boosting pills, some injections of commitment, some focus and concentration tablets, and a good deworming regimen to get rid of all lingering arrogance, the president-presumptive of the INC could be considered for the top job. Or maybe one of the 23 dissidents could do it instead.

Just like my mother once bought a metre of pretty gold-spangled tissue to fashion a lehenga for, and rejuvenate the mojo of, a bald, naked, one-eyed doll who had lost all its clothes after a dog chewed on it and left it in the gutter, we could bring in experts from the fields of economics, health and education as consultants and advisers to pep up the lacklustre squad.

Of course we would have to be very vigilant and monitor the workings of this unlikely, resuscitated, patchwork beast carefully—just like my father used to monitor the ragged tyres on his second-hand ambassador, switching the back tyres to the front and the front to the back repeatedly—so that none of them ever got complacent or corrupt.

NOTA is really not an option.