Ashoka, a liberal arts university at par with the best in the world, has been blooming in an improbable, air-conditioned bubble in the middle of the bemused Haryana heartland, for quite a few years now. I heard about it first on the lit-fest circuit in Jaipur, where several writers and translators I really respect spoke about it in glowing terms. So did the headmaster of my daughter’s school in Bengaluru.

And so, a year later (in spite of my Stephenian husband’s misgivings) we became Ashoka parents. Our younger daughter is an alumna (class of 2019), and our son is currently an undergrad, half way through his second year. We found the fees astronomical by Delhi University standards, but still only a tiny fraction of what one would pay for such universities abroad. The kids are razor sharp and fairly representative of all economic strata (48 per cent of them are on financial aid), and the professors, drawn from the best universities from across the world, are almost maniacal about interdisciplinary learning. Every student, no matter what his/her major, is taught to study every situation from multi-dimensional lenses—political, sociological, economic, biological, historic, philosophical....

There is also a mandatory course called introduction to critical thinking, which teaches a lot of good little boys and girls exactly that—to be critical, to analyse, and to challenge. 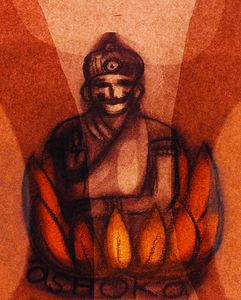 Every time we would drive back from the dreaming spires (or rather the gleaming blocks) of Ashoka, we would discuss how the cocky kids cocooned in there are in some ways very (in fact unusually!) aware of what is going on in the country, but at the same time, also curiously detached from it. Or perhaps, immune is a better word. It is like they seem to think that yes, the liberal space is shrinking dangerously outside, but things are never gonna get shrinky in here.

And now suddenly, they have.

Ashoka’s smug, academic La La land has been hit with by the cement truck of another kind of a lala land. The moneybags who fund the place have flexed, and the citadel is consequently teeter-tottering. Statement upon statement, each one more agonised and more impeccably composed than the last, is making it to the news as the dons attempt to finesse the fact that their founders/funders crudely commanded their shiniest intellectual superstar to pull his political punches, causing him to toss his (metaphorical) curls and dash off a letter of resignation.

Naturally, the students are all stirred up. They are denouncing the moneybags roundly, boycotting classes, but are showing up in large numbers to attend their chosen hero Pratap Bhanu Mehta’s final lectures. Using the critical thinking they have been taught, they are turning upon the institution that taught it to them.

Watching all the hand-wringing the chancellor and his team are now indulging in I am tempted to eye-roll and wonder, did they really think that what is happening at JNU, and IIMC, and FTII, and DU and the IIMs, would not happen, eventually, at Ashoka?

To quote Harry Styles’ broody ballad, ‘Just stop your crying, it’s a sign of the times.’

Now, I truly believe that Ashoka, just like the institutions named above, is a special place. It has been created with a lot of passion, and a lot of purity. It has done a great job in the short time it has been around, and their students are proof of it.

But if it really wants to stand true to its avowed, entirely laudable, and urgently needed mission of ‘providing India a truly world-class liberal arts education, in an atmosphere of complete academic autonomy and intellectual fearlessness’, then it is going to have to stop pussy-footing about. It should exhibit some of that rust-resistant, enduring iron the emperor it has named itself for put into his pillars, and take some tough calls.

Or sink into intellectual (if not financial) insignificance.