Regular readers of this column may remember the four desi stray puppies (Happy, Kali, Rani and Cola) whom my family and I have been fostering since last October. I had reached out to everybody I knew and used every platform I have access to (Facebook, Instagram, school and college groups, this column) to find somebody who would give them a loving home. And the response was universally zero, zip, zilch, nada.

And then suddenly, miraculously, help came from a source I least expected. From the east coast of the United States of America, people started writing to my sister (who is Boston-based, and fosters for the organisation Rescue Without Borders) that they would love to adopt a rescue puppy from India and that they would be happy to pay a hefty adoption fee to cover the cost of the puppy’s travel and medical bills!

These people humbly filled out what I can only describe as an extremely nosy application form designed by Rescue Without Borders (‘Is your home owned or rented? How did your last pet die? Where will your pet stay when you travel?’), and mailed my sister repeatedly and anxiously for updates on when the puppies would be arriving.

And now Happy, Rani, Kali and Cola are spending their days running about happily in my sister’s backyard in Boston, discussing whether they prefer the family with the two-acre fenced yard in Cape Cod, or the family in the Catskills with seven speckled hens, or the single writer lady by the River Charles with miles of walkways just outside her door.

Oh, and when it starts to snow, they run into her warm house, jump onto her couch, and watch the news on the telly with great interest. 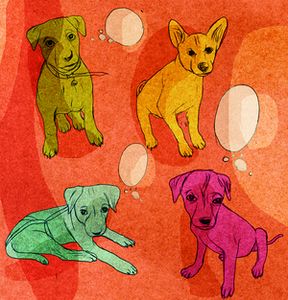 They are puzzled by the fact that America is trying to impeach its head of state, just for “incitement of insurrection”. Surely, that is entirely reasonable? Ask the Bengaluru-born puppies. Do all heads of state not incite violence and cause insurrection? We thought it is part of their job description! How very unpatriotic of these people to raise their voice against their head of state. Do they not know that a head-of-state is the mai-baap, the top dog, all-powerful and unquestionable, more powerful than a mere Constitution, and the concept of democracy, and the founding fathers’ ideologies?

They are even more astonished by the fact that this movement is cutting across party lines, that not only the Democrats but a growing number of Republicans are agreeing that Donald Trump is unfit for office and needs to be tossed into the dustbin of history, asap.

Firstly, dustbins are good places, say the puppies, we have found some amazingly tasty morsels inside dustbins, and secondly, it is unheard of for different parties to agree on anything. That is like one of the basic tenets of politics in a dog-eat-dog world.

They are also very concerned by the fact that Twitter, Facebook, Instagram, Snapchat, YouTube, Twitch and Reddit have had the gumption to ban a serving head of state from their platforms. As dogs, they understand the importance of a rigidly maintained social hierarchy, where the alpha rules with an iron fist and nobody gives him any lip, or everybody gets hurt, “real baddd”.

I did try to tell them, on our last Zoom call, that perhaps the “hoomans” of America know what they are doing. They adopted you, after all, I pointed out. Maybe their systems of governance and checks and balances are better and more robust than what we have here, back in India?

Maybe, finally, America is setting a good example for us, and for every other democracy enamoured of “strong” leadership to follow.

The puppies have agreed to listen to the news more carefully. And I, in my finally-puppy-free home, for once have nothing but admiration and gratitude in my heart for America.