Horrible things are happening. As cabin fever intensifies on a locked down world,

Horrible things are happening. As cabin fever intensifies on a locked down world, people are cracking up in strange and unprecedented ways. Salman Khan, for instance, has penned and crooned an utterly ghastly little ditty that makes every song from every Sooraj Barjatya film sound like a PhD thesis. It is so syrupy that after I played it on my phone, the screen felt sticky and chipp-chipp. I had to wipe it down with hand sanitiser.

Ramchandra Guha has thrown a hissy fit and sacked Delhi’s #1 newspaper for refusing to publish his column questioning the government’s aesthetically hideous Rs20,000 crore project to ‘revamp’ New Delhi’s Central Vista (what will they call New Delhi after this revamp? New New Delhi, like Sri Sri Ravi Shankar?). I feel his pain and frustration, but I think he should have sucked it up and continued his column. People like him need to be seen and read in mainstream newspapers. If their writings only appear in liberal online publications, the kind BJP supporters wash their eyes out with Ganga jal after accidentally glimpsing, then they will just be preaching to the choir.

Channeling Frida Kahlo with suitably thick quarantined eyebrows from her Swiss Chalet-like home in Manali, Kangana Ranaut has stated with a straight face that she is okay with people being shot to death, if they are attacking doctors and essential service providers. Yeah, straight away shot to death, not tear-gassed or water-cannoned or shot in the leg. She also called such people mullahs and secular media. And said people can call her a Nazi if they like. And asked the government to shut down Twitter and start its own micro-blogging site (Quitter? Litter? Bootlicker?). And ended by wishing all viewers a Happy Lockdown, like we are celebrating some festival over here. 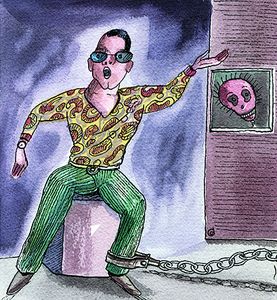 I have taken this particularly hard because I like Kangana. I like her acting, feminism, her amazing style, her doggedly learned English, her stance against nepotism in Bollywood and the fact that she had no godfather. But now, she seems to be soliciting a godfather with a vengeance. Becoming the latest Bhagwa Babe will make ever-pliant Bollywood cower before her for sure, but it will happen at the cost of being thought-controlled by the BJP and compromising on the individualist, feminist and artistic ideals she so fiercely cherishes. So not worth it.

In Lucknow, a teenage Muslim boy, whose parents say he was beaten by the police for flouting the lockdown to buy biscuits and was nursed at home because his family was afraid to flout the lockdown again, succumbed to his injuries and died. No statements condemning the act were made by the state government.

In Palghar, two saffron-robed Hindu sadhus and their driver were beaten to death by a frenzied mob who thought they were child snatchers, as the police stood by ineffectually. The footage of this bloody outburst was gut-wrenching. Equally disturbing was the way right-wing Twitter trolls frantically tried to find a communal angle to the incident. First they alleged somebody was shouting ‘Shoaib, Shoaib’ in the video (nobody was), then they said the area was ‘missionary-infested’. Nothing stuck. Finally, they resorted to posting graphic sketches of cowering sadhus being lathi-struck by men with long beards and no mustaches. Ah, well.

Oh, and the International Monetary Fund just announced that our growth rate is down to 1.9 per cent.

And finally, using a peculiar orangey-pink filter and wearing fake eyelashes, Rakhi Sawant posted an impassioned speech in which she reminded us that Hindu-Muslim-Sikh-Isai are all one God’s offspring and bhai-bhai. She said people who sought to divide India were evil, and warned, with grimaces and dramatic eyebrow wriggles, that they would suffer terribly for sowing seeds of hatred.

In these weird times, it is only fitting that Rakhi Sawant is making complete sense.