Hammer out a fresh script, Modiji

What a ghastly year it is been for the superstar trinity.

Salman Khan mincingly did his usual all-strut, no-sense routine and ended up at the losing end of the Race. Aamir rode a donkey, wore blue-eyeliner, aped a Hollywood star and fed drugged ladoos to Englishmen who spoke to each other in Urdu, even when they were alone. Most recently, Shah Rukh Khan shrunk himself down to four feet six inches, and played a cocky thirty-eight-year-old dwarf and romanced two of the nation’s beautiful women before departing on a space mission to Mars.

The audience was not impressed either by Salman’s lazy/safe more-of-the-same offering or the gimmicky outlandish fare the other two put out and showed its annoyance at having its Diwali and Christmas ruined by ungratefully not showing up at the theatres. 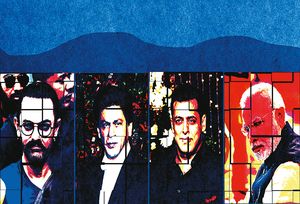 The empty seats clearly stated that the audience is done with superficial, one-tone drivel that presumes to take it for granted. Do not think that you can just do gora-bashing and I’ll love you, it is telling Aamir. Do not assume that if you sport stubble, boots, dark glasses and do a new dance step I’ll love you, they are telling Salman. Dimples can only do so much, it’s quite frankly telling Shah Rukh.

I have been there, cheered for that, tired of it, and now I’m craving substance.

(This the point when everybody turns around and blames the writers. But please understand that writers are the most bullied people in the movie business, and the primary reason they churn out drivel is not because they are only capable of writing drivel, but because the stars are making them write drivel and they are too much in awe of the stars to say no.)

This is the reason why any number of movies featuring non-stars like Rajkummar Rao, Vicky Kaushal and Ayushmann Khurrana have done so well this year. These are all small, rooted, solid, sincerely made films, without goodies or baddies, made by people with mutual respect for each other, and no superstar bloating the budget.

The parallel with politics easily writes itself.

As usual the star is being praised for trying to rise valiantly above a sloppy script, and the writers are being blamed for all that sloppiness. Nobody is mentioning the fact that the writers wrote originally about development. And then had to sit by sadly as their plot was arrogantly hijacked by quickie-fix tracks featuring evil, cow-killing Muslims, mandirs, gigantic statues, and luridly coloured currency…

So please huddle with your core team of writers again, Modiji. Listen to them and hammer out a fresh, sound script with a grand theme, a neatly defined first, second and third act, plus a killer climax. Spread out to last over a period of five years. Then stick to that script. Do not get derailed because your ratings slip on a certain Friday. Stay steady. If you have committed yourself to development—then work hard and sincerely towards giving the audience development instead of trying to sex things up by randomly turning on beef-eaters or menstruating ladies. Remember, focus, dedication and no dicking with the script will win the day.

(Also, writers, please have the gumption to stand your ground.)

You do not want that Ayushmann Khurrana of politics, that unlikely, puppy-faced Rahul Gandhi and his ensemble cast to run away with the Filmfare Trophy, do you?