In an increasingly polarised world, we have emerged as consensus builders

India is now returning to her rightful place in the global order. With the world grappling with multiple crises, India’s presidency of the G20 comes at a critical juncture. We were already amid a climate crisis, and the lack of progress on sustainable development goals (SDGs) was evident. Covid-19 compounded the distress. The impact of the pandemic has sent most developed economies hurtling towards recession in 2023.

As the global economy stutters, India has emerged as a bright spot. Our model of development has rightfully come under the spotlight. Our digital public goods, combined with economic reforms, investments in physical and human capital, and efforts to decarbonise have resonated with the world. Moreover, the prime minister’s message that today’s era is not one of war resonated globally and was reflected in the final G20 declaration.

India played a crucial role in the declaration at Bali in November. The negotiations were tough and complex, owing to a deadlock over a paragraph on geopolitics. India was key in bridging the gap between developing and developed nations in making the statement focused on economic growth and issues faced by developing countries. The final statement went out with consensus of all G20 nations, a major breakthrough. Our efforts in Bali were lauded globally and have set the stage for our presidency. 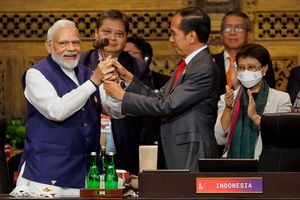 The essence of India’s presidency—“One Earth, One Family, One Future”—will be reflected in our priorities. As spelt out by Prime Minister Narendra Modi, India’s presidency will be ambitious, inclusive, decisive and action-oriented. Inclusive growth and realisation of SDGs will be high on the agenda. Resilient, reliable, and diversified supply chains for food and energy will be brought into focus. Issues such as SDG finance, energy transition and climate finance, to which the developed world has committed $100 billion since 2009, will also be high on the agenda, along with aspects such as LiFE (Lifestyle for Environment).

The power of digital development will be demonstrated. Globally, four billion people do not have digital identities and over two billion people do not have bank accounts; 130 countries do not have digital payment mechanisms. India’s successful digital public infrastructure model can hold valuable lessons for the world. Leveraging this infrastructure is India’s unique digital health model, which includes platforms such as CoWin. The National Digital Health Mission is another unique initiative.

These initiatives have been built on India’s strong manufacturing base in pharmaceuticals. Indian companies were able to quickly scale up and provide billions of doses of Covid vaccines. This only adds to India’s credentials as a leading manufacturer of pharmaceuticals, enabling access for the developing world. The power of women-led development will also be brought into focus during our presidency.

Among India’s unique contribution to the G20 will be the constitution of a new working group on disaster, risk and resilience. A new engagement group has been constituted on startups. India has seen phenomenal success, with startups solving not just economic, but also social issues. Multilateral reform will also be brought to the table. Public finance will not be enough to bridge the investment gaps faced by developing countries in their green transitions. Private capital will have to be mobilised. However, that requires an enabling policy and regulatory environment. We will bring into focus the role of multilateral development banks. Debate and discussion around their role in risk mitigation and enabling blended and private finance flow to developing countries will be a priority.

The G20 presidency is an opportunity to solidify India’s position as a world leader. In an increasingly polarised world, building consensus seems like a tough order. However, through our intervention in Bali, we have demonstrated leadership, and emerged as consensus builders. The world is now looking to India to chart a new course of development and prosperity. New India stands ready to take up this mantle and lead the world on a path of sustainable and inclusive growth.