In India, banks have reached every home, says Amitabh Kant

Eight years ago, the nation witnessed the stirrings of a revolution that touched over 46 crore Indian lives and counting—the Pradhan Mantri Jan Dhan Yojana was launched, and in less than a decade the scheme has scripted an unprecedented success story of financial inclusion in India. Within nine months of its inception, 12.5 crore bank accounts were opened. The numbers have only catapulted skywards since then.

The Jan Dhan Yojana started out with a vision to open a bank account for every household. It is now widening its horizons to aim for a bank account for every unbanked individual citizen in the country. The government has ensured almost 100 per cent coverage at the household level across most Indian states. An encouraging sign of economic progress is that most of the low-income Jan Dhan accounts are displaying a healthy appetite for savings products. Another testimony to the resounding success of the PMJDY is that out of the 46 crore Jan Dhan accounts opened in the last eight years, about 55 per cent account holders are women.

Aadhaar—the largest biometric unique identification system in the world—is considered to be one of the most advanced and sophisticated technological innovations by India. The e-KYC process enabled by Aadhaar is paperless, cost-efficient and secure. It also reduced KYC costs dramatically from Rs100 per person to less than Rs10 per person. The linkage of Aadhaar and mobile connectivity to bank accounts opened under the Jan Dhan Yojana proved to be a game changer for the government to provide subsidies to the poor through cashless direct benefits transfers. With 67 per cent of the accounts in rural and semi-urban areas, PMJDY has also created a demand for mobile and multiple banking touch points. 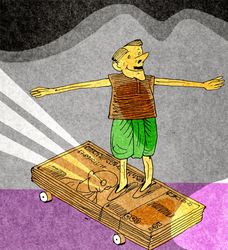 The vast coverage of Jan Dhan accounts has also provided a key impetus to India’s extensive adoption of digital payment modes such as the UPI and debit cards, with 31 crore RuPay cards now been issued. This is almost 30 per cent of the total number of debit and credit cards in circulation, with the number crossing one billion recently.

In 2011, the Reserve Bank of India had released findings, which stated that in India only six non-cash transactions took place every year for every individual with access to banking. Fast forward to 2022, real-time digital transactions in India stood at a staggering 49 billion. This number is three times the number of transactions in China and almost seven times the number in the US, the UK, Canada and Europe put together.

PMJDY is not just ensuring access to banking and financial services, it is also enabling millions of unbanked Indians to understand and use financial services to serve their needs efficiently. Prime Minister Narendra Modi has reached out to bankers with a request to shed their dated “approver-applicant” approach and include customers as their partners in progress by augmenting the government’s financial inclusion initiatives.

The most disconnected and impoverished in India are now rapidly being drawn into the ambit of formal financial inclusion. The next step is to widen the scope and develop beyond just basic banking and also focus on areas such as financial literacy and financial education. Financial courses can be conceptualised to familiarise the aspirational middle class in India with various financial instruments and wealth creation. The robust and flourishing financial inclusion infrastructure in the country has laid out a solid foundation for the future of the Indian economy and will positively impact the financial behaviour and decisions of Indian citizens in the near future.