To some, it may seem a little sad to begin the new year with a column on an individual who is no more.

R.K. Krishnakumar aka KK, who passed away aged 84 on New Year’s Day, was not just a business stalwart in the Tata group, but a deeply venerated corporate professional. Such was the respect for the reticent man—known to be Ratan Tata’s confidant—that it seems totally appropriate to acknowledge his contribution and bid him an affectionate farewell.

On his retirement at 75, Krishnakumar had occupied several key positions within the mighty Tata fold, serving as a trustee of the Sir Dorabji Tata Trust and Sir Ratan Tata Trust (which hold 66 per cent of Tata Sons). But the best thing about the man was his low-key image, which made him one of the most imposing and powerful individuals in India Inc. Such was his personality and innate modesty that very few people would have recognised the man responsible for so many vital business decisions on the rare occasions he attended public gatherings. He was the man who had Ratan Tata’s ear, but remained disarmingly unobtrusive till the end.

Mumbaikars can never forget the image of Ratan Tata with Krishnakumar by his side, watching the iconic dome of their beloved Taj Mahal Palace Hotel in flames during the vicious 26/11 terror attacks. Two brave men, leading from the front, letting their employees know they were together during Mumbai’s darkest, most terrifying hour. The Tata Welfare Trust was started soon after, but before that, they visited the homes of every single affected employee’s family and assured them care and support. 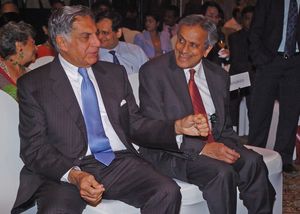 It was also Krishnakumar, with the full support of Ratan Tata, who dealt with an explosive situation in Assam in 1997, when ULFA activists kidnapped an employee and demanded ransom. It took months of skillful negotiations to bring the situation under control. Krishnakumar’s closeness to Ratan Tata went well beyond officialdom—both men preferred privacy above all else. Their personalities were in sync and most compatible.

Whenever I ran into Krishnakumar and his talented, beautiful wife, Ratna, I barely got a couple of sentences out of him. But with Ratna, our shared passion for handwoven, traditional saris always led to a lively conversation. With her knowledge of our rich textile traditions and a great eye for the unusual, Ratna and I collaborated for a fashion show celebrating the most exquisite looms of Varanasi. Her proud husband looked on and applauded shyly as impressed invitees in the vast Taj ballroom rushed to book orders and encourage the weavers.

For a topper with a master’s degree from Chennai’s Presidency College, Krishnakumar’s steady climb to the top echelons at Tata was remarkable. He joined the Tata Administrative Service in 1963, but shot to prominence in 2000 with the bold buyout of Tetley Tea for £271 million. After retirement nearly 10 years ago, he was rarely seen in public. But with a Padma Shri under his belt (2009), two years after he stepped down as managing director of the Indian Hotels company, Krishnakumar seemed to have devoted his life to looking after various welfare trusts, and in particular Ratan Tata’s pet project—shelters for stray dogs. In fact, when Bombay House—the most famous corporate office in India—reopened post renovation, Ratan Tata dedicated a portion to a kennel.

With Krishnakumar’s passing, yet another era of Tata titans has gone. Ratan Tata must be bereft without the quiet presence of Krishnakumar, who had travelled the globe with him often in his private jet, which Tata himself piloted at times. The tributes are still pouring in, but the most valuable one comes from Ratan Tata, who said, “I will always fondly remember the camaraderie we shared both within the group and personally. He was a true veteran of the Tatas and will be missed dearly by all.” Nobody could have said it as eloquently.