Since the myth of British monarchy exploded almost as soon as the queen’s death was officially announced on September 8, taking potshots or firing canon balls at King Charles III has since become a global sport. Memes galore highlight his multiple eccentricities and OCD issues. Like viral clips of the newly minted monarch throwing un-kingly tantrums over a leaking pen, as he swore during a formal ceremony in Northern Ireland, “I can’t bear this bloody thing… every stinking time!” The public scorn shifted from the leaky pen to his sausage fingers, and his insistence on having his shoe laces ironed by a butler. The bonny Charles was still behaving like a spoilt toddler—a super brat aged 73.

For all the flak he is getting, there is something to be said for a man who regularly talks to plants and has strong views on global warming. Who can fight genes, though? His father, prince Philip, was notorious for saying and doing outrageous things, making wildly racist comments and offending countless people. All was forgiven back then. But that era is over—people in public life are expected to behave themselves, especially if the public is paying their bills. Besides, Charles has been an understudy, a work in progress, for decades. If he does not get his royal act together, he might find his royal ass out of Buckingham Palace, sooner rather than later.

However, the queen will always get my vote for being a working woman all her adult life, completing her last official assignment of receiving Liz Truss at Balmoral, two days before she died. This calls for applause. Duty before all else is something her son may find difficult to manage, given his temperament.

I had the opportunity to meet Charles and Camilla Parker on three occasions. The chats were brief, of course, but not inane. I noticed how well briefed both of them were when introduced to a bunch of strangers they were unlikely to ever meet again. “What sort of books do you write?” the king (he was a prince then) asked. I replied, “Bodice-rippers, mostly.” He laughed heartily and looked around for Camilla to join us. This was at a charity dinner in his old London residence. 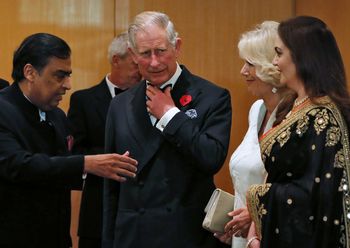 The second and third times were during his visit to India, when we were invited to a grand reception in his honour hosted by Mukesh and Nita Ambani at The Oberoi. The couple managed a few seconds of face time with a few guests. This was followed by his visit to Pune, where he and Camilla were guests of the Poonawalla family. Charles had a packed schedule—a visit to the Serum Institute of India, followed by a reception at the Turf Club to meet corporate heads, industrialists and other prominent Punekars. An elaborate high tea was organised in honour of the duchess, at the Poonawala mansion, for a few handpicked ladies. We were given specific instructions and advised to follow royal protocol. Fortunately, we were not expected to curtsy—my silk sari might have slipped right off, had I tried a dip and tripped!

The duchess was refreshingly normal, and chatty. It turned out to be a posh version of a kitty party, as we discussed children and pets over pastries and sandwiches. She came across as a sensible and kind woman, who knew the role she was expected to play—and did so with charm and humour. Meanwhile, my husband was twinning with Charles—both wearing beige linen suits! The pictures show them grinning widely and looking relaxed.

Let us give the guy a chance to settle into his new role. There will be a significant shift in how the world responds to his reign. For starters, henceforth, it might be wise for Charles to carry his own pen.