Surprisingly candid, Gokhale listens keenly and allows others to speak

First impressions: Wow! A non-pompous IFS civil servant! Rare. That too, someone with Vijay Keshav Gokhale’s impressive credentials. He is a reputed Sinologist with two China books to his credit, was the former ambassador of India to China and Germany, and a former foreign secretary of India. Gold standard. The setting: A common friend’s lovely flat in Pune. Gokhale (63) is a Pune boy, who has returned to his home town after retirement. His wife Vandana (Nagpur girl) and he became proper Punekars, forged new friendships, and blended seamlessly into the genteel upper-middle-class crowd, where the ladies play mahjong, are fond of gardening and cooking, and the men pursue their interests (golf, anyone?) in an affluent, leafy, upmarket enclave of the bustling city. The conversation flows easily, as we frequently break into Marathi and figure out a few connections we share as co-Maharashtrians. Gokhale is fluent in—get this—Mandarin Chinese, Sanskrit, Marathi, Hindi and English. I reckon it is safest to stick to Marathi!

I liked Gokhale’s ease and sense of humour, just as I liked his wife’s down-to-earth attitude. Given their joint experiences and distinguished background, they could so easily have been insufferable, opinionated show-offs, reeling off names of VVIPs they have entertained at their home during Gokhale’s fascinating career as a diplomat. 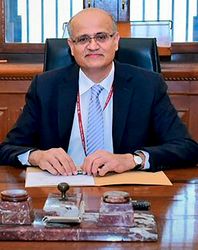 Gokhale is currently a non-resident senior fellow at Carnegie India, a Delhi-based think tank. For all these accomplishments and accolades, it is refreshing to meet someone who speaks without measuring every word, and is surprisingly candid while expressing opinions on the present scenario. Even better—he listens keenly and allows others to speak, minus bombastic pronouncements from his side. The day the Gokhales came over, the international buzz was about Nancy Pelosi’s dramatic Taiwan visit and its implications. Considering Gokhale has had the rare distinction of serving in both mainland China and Taiwan, his views were eagerly sought by all. He expressed himself articulately and lucidly, providing a sober perspective, even as Chinese jets were flying around the skies over Taiwan. While The New York Times headlined Nancy Pelosi’s visit, describing it as “utterly reckless, dangerous and irresponsible”, the feisty 83-year-old defied critics and went ahead with her plan, supposedly against President Joe Biden’s wishes. Thomas Friedman warned “bad things could happen”, while Chinese nationalists wondered why Pelosi’s plane was not shot down!

But, here in Pune—as we sipped a lovely, mellow white wine from South Africa, and desi Old Monk rum, munched on Mexican tacos, French cheeses, Norwegian salmon and Japanese rice crackers (can’t get more global)—it was a treat to listen to Gokhale’s considered analysis and get the sort of insights from a ‘man who knows’, someone who has been there and done that. For a civil servant who has worked closely with ministers like the late Sushma Swaraj, S. Jaishankar (an IFS colleague) to Prime Minister Narendra Modi, all eyes are on Gokhale as he plans his next tome. I had missed meeting the couple at the Jaipur Literature Festival earlier this year, but was glad to get to know them in Pune over two delightful evenings.

Our men and women from the elite IFS continue to do their challenging jobs often under circumstances that are far from conducive. The sort of machinations that go on behind the scenes are the stuff Hollywood thrillers are made of (remember Mr and Mrs Smith, with the incomparable casting of Brad Pitt and Angelina Jolie). It is time we scripted our own version. And, no, I am not suggesting Mr and Mrs Gokhale as a title!