Shobhaa De on Ranveer Singh and the naked truth

Ranveer himself must be counting the money generated by the pics

I tried to deconstruct India’s ambiguous attitude towards nangapan (nakedness) to a BBC correspondent who was writing a report on actor Ranveer Singh’s recent nude photo shoot for an international publication. For starters, I was certainly not offended by the fact that the actor had decided to bare it all for the cameras. Like I said—his body, his choice. The widespread outrage was misplaced. What did bug me was the lack of aesthetics, plus the tackiness of what ought to have been a breakthrough, cutting-edge shoot with one of India’s most admired superstars. The equally puzzling question is why did Ranveer sign up for such a yucky shoot in the first place? He is not promoting a new film. It can’t be for the money—he has scads of it, going by the staggering amount (Rs119 crore) he shelled out for his quadruplex in Bandra. Could it be for the shock value? Doubtful. Ranveer shocks fans every time he steps out fully dressed in bizarre OTT Gucci—the kind of gaudy, flashy couture even rap singers avoid. Discretion is not Ranveer’s forte—which is great! He has always been out there with a vengeance, and that’s his personality type. Is he a compulsive attention seeker? Sure. Most stars are, only they camouflage it better.

Ranveer has polarised desi reactions once again, and must be enjoying the meme fest thoroughly. He loves his bod, okay? Then comes the question of ‘propriety’—such a hypocritical, pious, typically Indian sentiment! “What about his conservative in-laws? They must be so ashamed. Bet they’ve stopped going out… as for his poor wife… can’t imagine her embarrassment now that the whole world has seen her husband’s bared butt.” Give them a break! The Padukones are no strangers to the antics of their flamboyant son-in-law. Deepika Padukone, his actor-wife, has done risqué sex scenes with suggested nudity with her co-star Siddhant Chaturvedi in Gehraiyaan recently. 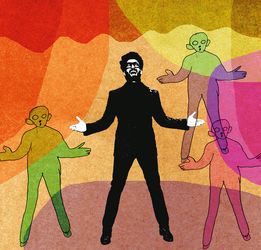 What if Deepika had done a similar nude shoot that left nothing to the imagination? If not Deepika, any other top Bollywood actress could have stripped for a publication and taken her chances with the public. What do you think would have happened? There would have been FIRs filed on obscenity charges, for starters. Followed by mass shaming and name calling. Ranveer, too, has not been spared the besharam (shameless) insults. But, I am pretty certain Deepika would have faced a lot worse.

The Ranveer I have seen and encountered over the years has been pretty consistent—he is an unabashed exhibitionist and revels in the attention he generates. He is also hyperactive and cannot stay still for more than a minute. He can be disarmingly funny, charming and clever, endearing himself to one and all as he willingly clicks selfies, often on the fan’s own phone! As an entertainer, he has few equals (even though I was most disappointed watching him with Bear Grylls last month). For a highly articulate person, of late, Ranveer’s vocabulary has rarely gone beyond four letter words, making me wonder—is he dumbing down to match his co-stars? Or has he figured his fans understand this lingo the best?

While we continue to debate his butt-naked shoot—what with an FIR filed—Ranveer himself must be counting the money generated by the pics. In terms of ‘exposure’ alone, he beat world figures to it. Will all this publicity translate into more endorsements? A Hollywood break? If not, the lyrics of his Gully Boy song will have come true: “Tu nanga hi toh aaya hai…Kya ghanta lekar jayega?” [You come in this world with nothing, and go back with nothing.]