The original launch day of Tasneem Zakaria Mehta’s labour of love, a hefty tome titled Mumbai: A City Through Objects—101 stories from the Dr. Bhau Daji Lad Museum, turned into a huge disappointment for the managing trustee (Tasneem) of this jewel of a museum. Sheikh Khalifa bin Zayed Al Nahyan had died the previous day, and the government of India declared a day of mourning and cancelled official functions as a mark of respect to the president of the UAE and the ruler of Abu Dhabi.

I was scheduled to attend my friend’s function, at which the book was to be released by Maharashtra’s cabinet minister of tourism and environment, Aaditya Thackeray. I felt disheartened by the unavoidable postponement of an event that means so much to so many (the new date didn’t work for me). The last time I had met the luminously beautiful Tasneem at her art-filled home in central Mumbai, we talked about the enormous stress that goes into editing and proof-checking such an ambitious book. But then, the Tasneem I’ve known over the past 40 years is no quitter. 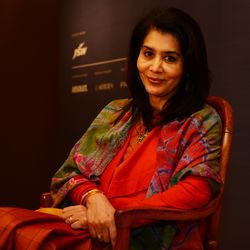 I remember her well as a beautiful young girl, greeting her politician/scholar father Rafique Zakaria’s illustrious guests at his beautiful apartment, each time she was visiting from Columbia, where she acquired her bachelor of arts degree in liberal arts, before doing her master’s in English literature from the University of Delhi. Today, with a PhD in cultural studies from JNU, Tasneem is recognised as a highly respected art historian, curator, cultural activist and a leader in India’s heritage preservation movement.

I know how hard Tasneem has worked to keep the museum going in the face of daunting odds. It was originally established in 1855, but thanks to Tasneem’s sustained efforts as director, visitors can today enjoy it in all its restored glory.

It’s lovely to be able to proudly flaunt our three generations of close friendship—I started off as her parents’ friend and today our children are close. We participate in each other’s lives with joy, and are there during occasions that really count. I enjoy Tasneem’s company as a gal pal—we often spend evenings at a favourite bar, and come away feeling elevated by the conversation. I glow with pride when I watch Tasneem in her official capacity as the lady who has determinedly placed her beloved museum on the world map, earning a UNESCO recognition for comprehensive restoration.

In the sprawling home Tasneem shares with her husband Vikram Mehta, the eclectic art on the walls tells many stories; in particular, some of the canvases painted by prominent women artists reflect Tasneem’s staunch commitment to feminism.

An invitation to dinner is much coveted—between Tasneem and Vikram, they know everyone worth knowing in the corporate, art, cinema, academic and social world. Visiting writers, award-winning filmmakers, thespians, public intellectuals, politicians of various hues, billionaires and assorted ‘famous people’ mingle in a relaxed atmosphere, over malts and wine, while a celebrity chef cooks an exotic meal.

I was privileged to be the ‘guest of honour’ at an evening hosted by the Mehtas to mark my 70th birthday. It’s difficult not to get mushy about such an overwhelming gesture! I was thrilled, of course! But also embarrassed and shy. I recall making a real mess of my spontaneous ‘speech’ to thank Tasneem and Vikram, after a generous toast was raised in the presence of wonderful friends.

Well—here’s my plan. As and when Tasneem hits her landmark birthday, I shall happily return the honour by hosting a dinner for her—and this time, I’ll be far better prepared!