As producer-director-actor, Ajay is soaring, with rave reviews for 'Runway 34'

There are three actors in Bollywood whose careers do not fall into the fairytale category. They are not Bollywood royalty (such an idiotic tab), nor do they belong to any camp. And yet, over a career span of more than 20 years, all three qualify as Bollywood tycoons—can you guess who they are? Hint: all of them are overtly macho Alpha males, fitness is their mantra. They don’t attend Bollywood parties, are married to attractive ladies and oversee their vast businesses very shrewdly. The trio of Ajay Devgn, Akshay Kumar and John Abraham are on top of their game right now, making movies they control, while managing mini-empires without making a noise about it.

After watching Ajay’s latest production (Runway 34), my lukewarm opinion of him changed dramatically. Here is an aviation thriller that is so convincingly mounted, you feel like one of the terror-stricken passengers on the doomed flight, which sees Captain Vikrant Khanna (Ajay) in the pilot’s seat, flying through a cyclonic storm, before landing on Runway 34 at Thiruvananthapuram. 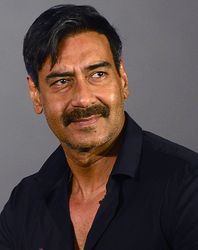 Assuming a triple responsibility as produce-director-actor, Ajay is indeed soaring at 35,000 feet, with rave reviews pouring in for a movie that is taut and terrifying. Most of the scenes are shot in the confines of a cockpit, but there is nothing claustrophobic about the shot taking. If anything, it gives curious viewers an incredible window into the nerve-wracking atmosphere inside the cockpit during emergencies. Ajay displays maturity and restraint while managing to keep the audience on the edge of their seats, wondering when the worst will be over.

When Ajay, 53, married Kajol, a leading star, (in 1999), the film industry was rather surprised and amused, given their differences. She was an outspoken, bohemian bookworm, often found with her head buried inside a tome on the sets, while he was a rough and tough upcoming action hero, who barely spoke a word, either in his movies or in real life. Today, Ajay has over a 100 films to boast of, two national awards and several commercial hits. All this without possessing conventional good looks, overt charm or networking skills. He is pretty much a lone wolf, who does not go out of his way to court the press or seek publicity. Validation is not for him.

I have known Kajol over the years, first, as Tanuja’s talented daughter, and later as cousin Gautam Rajadhyaksha’s most adored protégé. I remember one particular shoot for Kajol’s debut film (Bekhudi). The director wanted her in pig tails, and I was enlisted to braid her hair since nobody else knew how! I had found her impish, impetuous and spontaneous, on and off the sets. At 17, she was very aware of her family’s legacy and her own talent. So, when she married Ajay seven years later, I was as surprised as everyone else. Sensibly, both had shunned a splashy Bollywood style wedding and stuck to a private ceremony.

Today, Ajay is a bossman—assertive and super confident. He, obviously, believes in the power of numerology, given the strange, altered spelling of his surname, and the additional ‘F’ in his production house Ajay Devgn Ffilms. His stylised dialogue delivery and unique entry scene in every film reminds me of the late Raaj Kumar, who was an equally reticent actor preferring to let his movies do the bragging.

Runway 34 has taken off successfully and is cruising well at the box office. Directing Amitabh Bachchan (playing Narayan Vedant, a tough lawyer), must have been quite a challenge for Ajay. But both men held their own without yielding an inch during the climactic on-screen face off.

Assuming Kajol and Ajay are prepping their daughter Nyasa for a career in the movies, the next gen Devgn is already here!