Mention Aryama Sundaram’s name and the instant response is: Aaaah! That brilliant Supreme Court lawyer with a prominent tilak. In fact, the tilak is a birthmark and not a caste or political party identity. Combine that distinguishing mark with Sundaram’s out-of-the-box thinking, and you get a unique individual.

His personality is on full display each time he appears on televised panel discussions on tricky legal/constitutional issues. Viewers listen intently to Sundaram’s forceful line of argument, while pompous TV anchors stay mum—they dare not interrupt him! Such is the senior advocate’s authority, the depth of his knowledge, to say nothing of his articulate delivery. For a man born into a family of illustrious lawyers (Sir C.P. Ramaswamy Aiyar was his grandfather), it is this impressive lineage he has to live up to—and does! 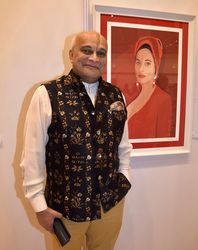 Here is a guy who started his career in advertising before switching to law. Sundaram’s erudite and supremely charming approach have won him loyal fans and high powered clients—he is seen as one of the most connected lawyers in India, on informal and cordial terms with the mightiest in the land. It is predicted he will soon become the attorney general of India—if political stars align, of course. At 38, he was the youngest in the history of the Madras High Court to become a senior counsel. He has not looked back since, going on to represent the BCCI in India, and dominating the field in corporate law with his dazzling intellect.

We know him as a close friend of the family, a true blue bon vivant, deeply interested in art, cigars, malts, wines, books, race horses, music, watches, cars, travel and all things bright and beautiful. On his 60th birthday, his Jorbagh home saw the rich and powerful, across political divides, letting their hair down while enjoying live performances by nubile belly dancers and mujhra artistes. More recently, on his 65th birthday, perfectly planned by friends as a hedonistic Easter weekend in Alibag, Sundaram, dressed in neon for a theme party by the beach, sported a shirt that read, “Call my lawyer”. There he was, puffing on his favourite Monte Cristo, shaking a leg to a playlist that went from Elvis Presley to ‘Oo Antava Oo oo Antava’. The celebrations had started as soon as bottles of bubbly were popped on the deck of a catamaran sailing at a leisurely speed to Mandwa jetty.

For me, personally, I owe Sundaram a big one. At a difficult time a few years ago, when I was being hounded by local political parties, who had tried several tactics to intimidate me, sending morchas to my residence, and threatening to blacken my face at a high-profile book launch at Crossword, all it took was one phone call to Sundaram. He fought my case fiercely in the Supreme Court; thanks to his superb presentation, I was not jailed on some ridiculous contempt charge.

He is the ‘chosen one’ with good reason. Behind the laid back bonhomie and ‘cool’ exterior, here is an admirably disciplined professional, who gets to work at 8.30am and does not stop till 10pm. He leads a great team and ensures every brief gets the required attention. Meticulous and thorough, his commitment to freedom of speech and expression is consistent, making him a role model for the next generation of legal eagles.

Outspoken and forthright, Sundaram certainly knows his priorities—work hard, play hard—and make time for those you love. Watching him enjoying himself on the dance floor, sporting a crazy rainbow hued wig, I looked up at the full moon illuminating the Alibaug sky and said a silent prayer for our friend—jeeyo hazaaron saal!