Shobhaa De on the economist who cooks and dances

The iconic Jaipur Lit Fest unfailingly throws up a few shocks and surprises—thank God! How very dull the literary landscape would be without a couple of zingers to pep it up? In its 15th edition this year, and at a brand new venue, authors and readers were in a state of heightened excitement, what with two pandemic years of reading scintillating writers without the chance to interact in reality?

I was agog in anticipation as I made it for the last three days of what is frequently described as “The greatest Literary Show on earth”. For a change, I had decided to stay back for the grand finale—the Writers’ Ball. What a treat I would have missed had I skipped it! For there on the crowded floor, packed with attractive, gorgeously dressed young things on the vast grounds of the magnificent Leela Palace Hotel, was a super fit, familiar looking man, dressed in an embroidered kurta-pajama, energetically dancing to popular qawwalis belted out by Chugge Khan and his musical team, Rajasthan Josh. A few foreign delegates—adventurously clad in local colours and costumes, and fuelled by limitless beverages on offer—made the most of the incredible atmosphere that signalled the end of yet another successful JLF. 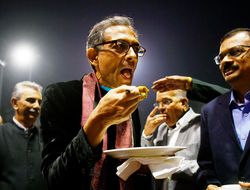 But it was Abhijit Banerjee who stole the show.

That is the thing about stereotyping famous folks. Till you actually meet them and discover some fascinating angles to your own version of the person. A Nobel laureate shaking a leg to robust beats of local musicians? No, are you sure that is Banerjee? How can I forget his latest bestseller which has nothing to do with economic theories and is devoted to Banerjee’s other passion—food!

I absolutely adore mixed signals myself. Why can’t a guy like Banerjee (61)—who spent 10 days in Tihar Jail (1983) for participating in protests at Jadavpur University and then went on to shine at Harvard, and collect academic accolades along the way—cannot be a superlative cook who loves feeding friends with culinary experiments that can now be tried in one’s own kitchen? That he has a mind and personality of his own, was made abundantly clear at the solemn Black Tie Nobel ceremony in Oslo, where the American economist with a desi heart, arrived grandly on the red carpet elegantly clad in a graceful Kolkata dhoti. That single image stayed with me and I went, “Wow! Gotta meet this dude someday.”

Well, meet him I did, at the chholey baturey breakfast buffet counter at the hotel where authors and delegates were put up in Jaipur. It was the morning after the night before. I was bleary eyed and in search of dosas and coffee. We introduced ourselves. And he invited me to join him and his petite book illustrator, Cheyenne Olivier. I noticed that their table was laden with food. Aha, a man after my own heart! Healthy appetite. Loves dancing! Cooks amazingly. Where does it all go? He is spry, almost rake thin! But with that brain—who looks at the waistline? Banerjee sweetly referred to me as ‘Shobhaa di’, when I introduced him to my husband. I left them to discuss world issues, food and their love for dhotis.

Banerjee shared that he was accustomed to wearing dhotis in Kolkata, where he grew up in a traditional home (his father Dipak is Bengali, his mother Nirmala, a Maharashtrian—both are economists ).

Despite his global fame and success, Banerjee remains a down-to-earth, slightly old-fashioned bhadralok, respectful, formal and very polite. He has promised to cook for us if we are ever in his part of the world. And my husband is already thinking of what he can cook for him when Banerjee visits Mumbai, in July. Meanwhile, Cheyenne is keen on our trying out Banerjee’s recipes.

I can see a long term friendship getting cemented over daab chingri and kochano dhutis. How delectable!