Ask any music lover what he or she thinks of Lata Mangeshkar’s voice, and the answer will be: “It’s the voice of an angel… a celestial being.” There was a unique divine quality to her singing that made her an unmatched phenomenon. It was the innocent, playful, pure voice of a pre-pubescent girl—thin and delicate, teasing and hesitant. Nobody could believe a woman in her seventies could croon a tender love song, and sound like a seventeen year old. As a vocalist who recorded more than 30,000 songs in 36 languages, Lata had no equal. She was well aware of her special status, even if her innate reticence ensured she never misused her position. She has the rare distinction of being a working woman for seven decades.

I did not know the legend, and was more in touch with her sister Asha Bhosle, who had once regaled us at our home over dinner (she had cooked her famous kebabs in our kitchen), with perfect imitations of her tai (sister), down to her baby voice, mannerisms and body language. The mimicry was not mean or cruel, but it did provide a glimpse into the decades-long sibling rivalry insiders often talked about. 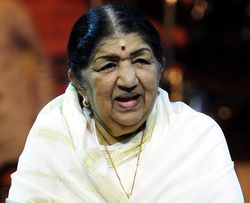 Asha is far more ‘real’ and earthy, and frankly, I prefer her voice and versatility as a vocalist. Those who were close to Didi (as Lata was called), say she had a terrific sense of humour, besides a phenomenal memory. But the public persona remained aloof and distant, letting her songs create all the magic. We had a common connection in Gautam Rajadhyaksha, the great portraitist, who has the rare distinction of having captured the entire Mangeshkar clan in one frame—nothing short of a feat.

What few people outside her inner circle knew about Lata was her fondness for gambling. I hear she was a frequent and valued high roller at casinos in Las Vegas. Only the BBC report on her passing made a reference to it. Frankly, it is hard to visualise the diminutive, demure lady in white playing blackjack, but if true, it humanises her that much more!

It is believed it was Lata who inspired Raj Kapoor to immortalise ladies in white, whether in his movies or personal life, from Nargis to Krishna Raj Kapoor. Interestingly enough, each time I visited Pakistan, I would hear Lata’s voice at random venues, followed by animated discussions about her awaaz as compared with Noor Jehan’s. Someone would invariably say, “You have the Taj Mahal and Lata Mangeshkar and we have Lahore and Noor Jehan.”

Strange, but Lata seems to have sung songs to match every mood and occasion known to the subcontinent. We turned to her seeking solace in grief, or joy in our celebrations.

Lata’s legacy is defined by her prolific output (at her prime, she would record three or four songs a day), as much as her mellifluous range. Famous music directors who worked with Lata insist she was the one singer who never ever hit a false note! She was also a ‘one take’ recording artist who slaved over her pronunciation and the all-important emotional nuances of the lyrics. She resolutely refused to play to the galleries by singing songs that did not meet her high standards. Cheap lyrics and gimmicks were not for our Lata tai!

There is so much to learn from her extraordinary life…. Now let us wait for the statue, if not the controversial flyover to come up, though an international class music academy like The Juilliard School in NYC will better serve her legacy and ensure a 1,000 more nightingales are nurtured.