Confession: I had not watched a single film featuring Allu Arjun or Samantha Ruth Prabhu until I bought a ticket for Pushpa—The Rise and found myself mesmerised by their sheer star power on screen. Sure, Samantha appears briefly in her debut dance number on the screen. But hey, what a debut!

No wonder Oo Antava made it to the top of YouTube’s Top 100 Music Videos list. Personally speaking, I did not know the identity of the sensuous dancer till I got home and googled her. But she had left me gob-smacked in the theatre. Oo Antava far outstripped Kala Chasma and Chikni Chameli—Katrina Kaif’s sizzling chartbusters—which are pretty hard to top by any artist. Sam’s moves did just that! Respect. 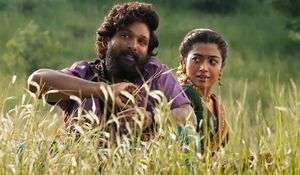 As for Allu Arjun—and his portrayal of a rough and tough sandalwood smuggler who rapidly rises to head the powerful, brutal syndicate operating in the dense, hard-to-access jungles of Andhra Pradesh—I can only say after 40 years of watching movies and tracking stars, here is one actor who gobbles up the scenery and spits it out, using his hypnotic eyes and body language to full advantage.

After Amitabh Bachchan’s Angry Young Man in Deewar (1975), here we have a “furious young man” setting the screen on fire with a mere twitch of his eyebrows. I had no idea who he was, and I had gone primarily to find out what it was about Pushpa that had got the box-office rocketing during restricted Covid-times. I came away dazzled by a madly talented stranger—not a heavily-marketed brand.

Once home, I hastily filled in the gaps by finding out more about the man. I will not bore you with details. A few years ago in Hyderabad, young family friends had proudly taken me to a nightclub called 800 and told me it was owned by a star named Allu Arjun. Well… the place was OK. I was indifferent and the star’s name did not register. Today, I am less ignorant and realise it is the same actor I am singing hosannas to after watching Pushpa.

When I mentioned this to my friends and family, they were equally in the dark—and mind you, all of us are avid movie-goers. That can only mean one thing—there is a huge disconnect. The star system in Bollywood is established globally and understood across India.

Pretty much everybody in south India knows who Shah Rukh Khan is, but how many avid movie fans from the north know Chiranjeevi? Or Mahesh Babu? Or Vijay Devarakonda? True, Bollywood films do not create the same hysteria in Chennai, Bengaluru, Kochi or Hyderabad as they do in the rest of India. But even superhit films from south India remain unknown here. All that is likely to change down the line.

I was so impressed by the dubbing in Pushpa, particularly the sprinkling of Marathi slang, I barely noticed it was not in the original language. Since Pushpa has been a success in four languages (Rs247 crore collection worldwide and counting), the future for dubbed movies getting a commercial pan-India release is looking bright!

At a time when the movie business across the world is struggling to stay afloat, creative, swift, out-of-the-box solutions are the only answer for survival. Combine this crisis of bloated budgets and astronomical star fees, with the other challenges posed by OTT platforms, and it is obvious what needs to be done—move forward with aggressive and creative marketing strategies, which include sophisticated, well-synced dubbing.

Bollywood respects numbers and worships success. Despite the staggering popularity of mega stars from down south, the crossover has not happened. Cross-pollination is always a good idea and a healthy investment in the ecosystem. I am hoping we get to watch the amazing Allu as the lead in a Bollywood blockbuster soon.