The best thing about Neerja Birla at 50 (her milestone birthday was in April) is that she has come into her own! No longer is she viewed as just the elegant, beautiful wife of Kumar Mangalam Birla—one of India’s most respected billionaires—but as an articulate and dynamic personality in her own right. Having known her as the shy, demure, soft-spoken bride (they have been married for 32 years, and have three grown up children), the poised and eloquent woman I meet these days surprises and delights me!

Recently, her husband celebrated her 50th birthday with a well-planned three-day family retreat in Chandigarh, to which he had invited around 60 members of the extended Birla parivar. The posh and super exclusive The Oberoi Sukhvilas resort had been booked out for this private and precious occasion. I was invited to be ‘In Conversation’ with Neerja, since we have known each other over the years and there is a great deal of genuine fondness both ways. The idea was not to roast or grill the birthday girl, but to keep the interaction lively, light-hearted and engaging for the assembled family members. Neerja is a morning person, unlike me. She was as fresh as a bouquet of just-picked flowers, dressed in a pastel-coloured couture outfit, her eyes shining, her smile dazzling. And there I was—bleary-eyed but excited to draw her out and make the session rock. After all, her husband was seated in the front row, along with her mother-in-law, the wonderful Rajashree Birla. 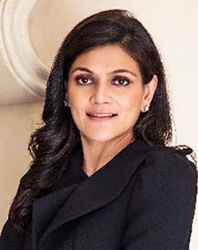 I need not have worried! Neerja was on top of it from the first question itself! Both of us had decided not to follow a script, or stick to a format. The conversation was free flowing and surprisingly candid.

Today, Neerja has taken on several roles and challenges that keep her on the move non-stop, as a philanthropist, mental health activist and educationist. She is invited as a motivational speaker across India, and is known to extend her support to several NGOs and charities dealing with underprivileged children. Neerja spoke about all her various commitments with refreshing candour, and did not shy away from saying it like it is, during a short banter with her husband, whose views on marriage and parenting differed from hers.

I reminded both of them about the time years ago when we used to watch movies together at their private theatre, and how unobtrusively Neerja would ensure everyone was looked after. She was always traditionally dressed and several kilos heavier than she is today.

The physical transformation is pretty dramatic. At 5.7”, Neerja has the posture and elegance of a supermodel these days, as she makes solo public appearances dressed in casual couture that does not shout. She is an enthusiastic member of a club that attracts cross-country cyclists, who explore new destinations regularly. Her cycling trips through Kerala and Rajasthan, she says, have been real eye-openers, as the group made unscheduled loo stops in villages, and experienced nothing but warmth and genuine desi hospitality.

Neerja told me that she and her children had started to read the Bhagavad Gita during the early days of the lockdown. It was their way of coping and bonding through this terrible period.

The next few years look exciting for Neerja and her close-knit family.

We attended the soft launch of Jolie’s—a trendy private club spread over 21,000sq.ft, and driven by Aryaman, her 24-year-old son, who till recently was a professional cricketer (Ranji trophy and IPL included). Ananya, her singer daughter, is making waves internationally, while Advaitesha, the youngest, is actively working to further expand the Birla mental health initiatives. Neerja’s glow of pride cannot be missed!