Amartya Sen is a rare gem who doesn’t take his own genius seriously: Shobhaa De

Remembering, however, is not the same thing as writing a memoir,” said the much-celebrated Bharat Ratna and Nobel Prize winner in Economic Sciences, Amartya Sen, on the first page of his recently launched Home in the World.

It is indeed a brisk, breezy and delightful read---anecdotal and chatty. But, as critics have pointed out, it doesn’t quite hold up as a satisfying memoir written by an iconic world intellectual, gushingly described as a modern day Voltaire by noted economist Kaushik Basu, no less. In a recent essay, Pico Iyer has asked a significant question, “Where is home’’?

For a cerebral nomad and quintessential philosopher like Sen, perhaps ‘no fixed address’ works a tad better than the loose English translation of Satyajit Ray’s masterpiece Ghaire Bhaire from which Sen has taken the title for his tome. “Home and the world are the same thing for me,” Sen emphasises. 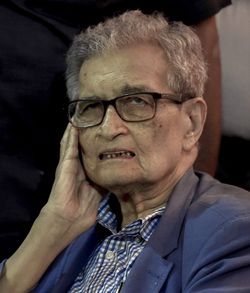 My last meeting with Sen was at an intimate dinner hosted by his adorable son-in-law, John Makinson. Sen had delivered a sterling keynote address at the Jaipur Literature Festival, followed by an erudite conversation with John. I am sure Sen (83 at the time) was pretty exhausted, but his legendary appetite for conversation, people, wine and great food, ensured he and his historian wife, Emma Rothschild, wouldn’t skip the elaborate dinner laid on in their honour by the Rambagh Palace Hotel. He was surprisingly relaxed and talkative as the six of us gupshupped informally and laughed a great deal. I had shared my ‘plan’ for Sen’s next book with John and Sen’s gorgeous daughter Nandana. After a couple of glasses of a superlative Red, I took a deep breath and announced, “I have an idea for your next book---I think you’ll love it.” Sen stopped eating and looked at me. Encouraged, I blurted out, “You should write a follow up to the wildly successful The Argumentative Indian…” I stopped. He waited expectantly. All eyes were on me. I said to the world’s most respected economist, “Please write a book on ‘The Erotic Indian’.” Silence. But not an outright dismissal. Recklessly, I went on to elaborate on the theme, taking care to mention it would be a thoughtful study on the history of eroticism in our part of the world, and not a trivial undertaking of our sexual peccadillos. What followed was a lively exchange on the literary merits of such a book, but Sen, regretfully confessed he was not an authority on the subject and would therefore have to pass!

Sen calls himself an atheist, but his knowledge of world religions is staggering. His love for travel has had to be curtailed given his frail health, and the fact that he has endured serious sicknesses, including mouth and prostate cancer, since a very early age. But nothing can stop Sen!

As a very vocal human rights campaigner, who is described as ‘a citizen of everywhere’, Sen is a rare gem who does not take his own genius seriously. He has an impish sense of humour, and the curiosity of an exceptionally bright child. His eyes sparkle and dance as he holds forth on a myriad topics with consummate ease, making it appear so effortless. So, I wasn’t surprised to hear Sen dismiss some of the more rabidly anti-Muslim views of the ‘other’ writer-genius---Trinidadian Indian Nobel prize winner V.S. Naipaul. “Absolute Nonsense,” Sen retorted when asked what he thought of Naipaul’s take on the history of India’s Muslim dynasties. Had Naipaul been alive, his withering comeback to Sen’s putdown would have been epic!