Let us start with a horror story: Recently, a 25-year-old man in Bareilly stitched up his wife’s private parts with aluminium thread, suspecting her of infidelity. He expressed no remorse when he was arrested. The victim survived after being left in a pool of blood. Yup, this actually happened. It is, no doubt, an extreme case of marital violence, but it does reflect the terrible reality faced by women in rural India.

Then there is the other kind of equally disturbing urban reality—the sort projected in Bombay Begums, the Netflix series. It features Pooja Bhatt and a host of exceptionally talented actors. It is positioned in the rarefied world of modern banking, where, as we know, Indian women have led the charge for years. Bombay Begums is not that far-fetched, even if a few critics have shredded it mercilessly, going so far as to demand Netflix “sack” its staff for projecting “empowered women” in such a distorted fashion. A senior critic insisted she found the representation highly offensive. There is more to our lives, she said, than harping on exclusively female concerns—menopause, miscarriages and menstruation. I am not sure if these objections were based on squeamishness or prudishness.

Pooja plays Rani, the boss lady of a bank, surrounded by male sharks in sharp suits out to get her. And yes, she is menopausal, often rushing mid-presentation to the executive loo to deal with hot flushes. Her deputy Fatima (Shahana Goswami) is faced with a dilemma after suffering a miscarriage (graphically projected), while her precocious step-daughter Shai (Aadhya Anand) agonises over delayed periods (staring at her stained panties when it finally arrives). Granted, this does not make for ‘pretty’ or ‘entertaining’ viewing, and I am sure several viewers squirmed. But, hello! Haven’t we all gone through similar incidents as women? Is blood and gore in testosterone-driven action thrillers more acceptable because it is male blood spilling on screen and not a female bodily discharge? 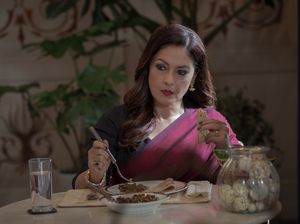 Bombay Begums deals with other issues, too—class divides, infidelity, betrayal, cover-ups, gender fluidity, religious prejudice, sexual harassment, body shaming and surrogacy. Pooja’s character is sharply delineated and mostly credible. She could have been projected as a one-dimensional archetypal power lady—ruthless, manipulative and insecure about other women. Fortunately, that trope has been junked to show her as a far more nuanced career woman, dealing with her share of domestic conflicts and not afraid to confront her many vulnerabilities. Men in her elevated position are rarely given similar problems to resolve.

Pooja tackles the role bravely, playing her age—49—and making a heroic effort to handle clumsily written sex scenes. These feisty ‘begums’ drink, smoke and have sex freely on an ‘as and when’ basis. If a few viewers were wondering whether such stuff happens... erm, yes! Do teenagers snort coke, down shots and hook up with classmates? They most certainly do. Why shut our eyes to the drastic, even dramatic, shift in our society? Small-town India merged with the big, bad cities when no one was looking! So, the young girl from Indore who slips in and out of beds and relationships in Bombay Begums is not a caricature at all. Walk into any pub today, and you are likely to meet Ayesha (Plabita Borthakur). While the men in this series (Rahul Bose, in particular) have been reduced to clichés, it is important to remember that the series is driven by begums and not nawabs. Perhaps, season 2 will rebalance the dynamics.

I was delighted to watch Pooja back where she belongs—on screen. Having known her since she was a teenager and admired her spunk, it was wonderful to see her as the begum of begums! Someone with her talent deserves nothing less than a meaty enough role to rate as a worthy comeback. I am glad she got it!