The tycoon who inspired a book

Shantanu Naidu and Ratan Tata share a unique relationship. The legendary tycoon is an octogenarian, and Shantanu, a millennial. Age does not come into their incredible bond. They are ‘friends’—close, connected and perfectly in sync with one another. I Came Upon a Lighthouse: A Short Memoir of Life with Ratan Tata chronicles the enviable love they share—there is no other word to describe their partnership. The bond began in 2014 when Shantanu was a dog-loving student in Pune; an automobile engineer, he developed an innovation to save local strays from being run over by speeding cars. In a short note at the start of the book, Tata writes about how Shantanu came into his life—it started with their deep compassion for homeless, ill-treated, abandoned dogs and cats—and grew into something astonishingly tender and beautiful. Tata invested in Shantanu’s small start-up, after receiving a letter from him about his passion-project, Motopaws. 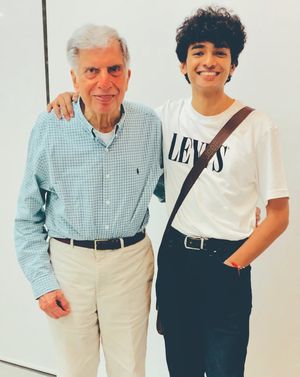 Today, Shantanu works closely with the man who not only made it a point to attend his simple graduation dinner in Ithaca—cooked by Shantanu’s amma, after he finished his MBA at Cornell—but also offered him a coveted position (deputy general manager) in his own office, which is efficiently run by four handpicked people, three of them being women. Shantanu’s book (illustrated by Sanjana Desai) is all heart and sentiment. It is written with disarming candour and a touching simplicity. When he writes about enjoying strawberry waffles for breakfast at the spiffy New York hotel, The Pierre, with an amused Tata across the table, or when he describes his morning swims to ‘get some sun’ while on a Kerala break with the business magnate, there is an appealing sense of naturalness in the tone. It is like frenzied international travelling on a private jet with a world famous icon, and being in the presence of global celebrities at dazzling events is really no big deal for this young man from Pune! That is how intimate and true their feelings are.

Tata is a reticent man. He guards his privacy fiercely and rarely attends public events. For all his genuine humility and modesty, his is one name in India which comes with a platinum edge.

December is Tata’s birthday month—and one would imagine a man in his position would be busy cutting a multi-tiered cake with VVIPs. Nothing of the sort! Shantanu tells us that for the past few years, it is he who organises two cupcakes with a single candle, a ‘crappy’ movie, and pina coladas (for Shantanu) and that is how they celebrate! The book is about several such delightful anecdotes, which show Tata in a totally different light. Readers get to see his other, very human side which allows him to crack jokes with Shantanu about his curly mop of hair, or tease the young man about ‘lipstick on your collar’—a popular song from the 60s.

‘Shantaa-nu’, as Tata calls his adoring executive assistant, is blessed and privileged indeed. He even has a picture with his arm flung around the legend! When he refers to his boss, friend and mentor as a beacon of light, it warms our hearts. I loved the bit where Shantanu shared priceless nuggets of their ‘pandemic time’ together, when the great man would watch over Shantanu as he finished a gigantic chewable vitamin-C tablet or reluctantly drank turmeric milk. Shantanu has given the world a real treat—by showing readers the most endearing side of a man who is seen as a superhero by millions.