How bad are bad boy billionaires?

Did India really need a tepid docudrama on a few ‘bad boys’ to understand what was going on? Hardly! When someone called Francis phoned from London more than a year ago and ran the Vijay Mallya proposal past me, I instantly refused.

But he was persistent. Countless calls and WhatsApp messages later, and after repeatedly stating that I would not badmouth a family friend, the shoot was finally scheduled. I did not provide access to my home, nor did I provide any leads. I granted an hour and told the team to hire a room at The Taj Mahal Palace, Mumbai, which is close to where I live. It was pretty obvious that they were in search of masala—anything sensational and negative that would damage Vijay’s reputation. It was only after they mentioned the participation of Vijay’s son, Siddharth, in the series that I came on board. 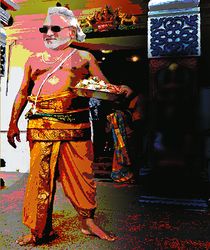 The probing questions, asked softly and politely, were shrewdly constructed to disarm the interviewee and get the person sufficiently relaxed to spill a few beans. Well… they picked the wrong person. All attempts to goad and bait me into saying terrible things about Vijay fell totally flat.

Vijay is way too smart to let amateurs rain on his party! I am not here to sit in judgment over his life or business decisions—let the courts unscramble those intricacies. The Vijay we knew as family was far more interesting than the public persona. That ‘construct’ came much later, after he had decided to brand himself the ‘King of Good Times’ and court mega media attention. Back then, it seemed like clever positioning to enhance brand recall and push beer sales. Looking back it is this very tag that came back to bite him.

Of course, Vijay changed over the years and the person we saw at his defiant 60th birthday party in Goa was by now a global ‘rock’ star—revelling in extravagance, flaunting his flamboyance. And, possibly, enjoying it all—the fawning courtiers, the lackeys, the groupies, the hangers-on.

We had been his house guests years ago at the very same Kingfisher Villa, during the housewarming party, which followed a very traditional ‘Griha Pravesh’ puja earlier in the day, performed by family priests he had flown in. Vijay was (and I am sure remains) a deeply religious man, a proud Gaud Saraswat Brahmin, who abides by rituals and dutifully adheres to his faith. He is an extraordinarily attentive son to Lalitha—his mother, the feisty matriarch, with whom I have spent quite a few entertaining hours, laughing and chatting about the ‘good times’, not all of them connected to her son.

Vijay has one of the quickest, sharpest minds, capable of calculating several unconnected matters simultaneously. He counts in Kannada, speaks fluent Bengali and is anything but a random ‘philanderer’.

Unfortunately, this Netflix docudrama is a missed opportunity. It lazily skims the surface. There are no new insights and it has nothing fresh to offer. Regurgitating what is already in the public domain is a facile way to approach a multi-dimensional personality like Mallya. It was Sid Mallya’s impassioned defence of his father that salvaged this project from total collapse. Let us hope there will be a more comprehensive, in-depth portrait of a man whose wild reputation hides his other, far more complex side—the one I know and like.