Suhana Khan comes into her own

It cannot be easy being the offspring of a Bollywood superstar known as King Khan. But, Shah Rukh Khan’s 20-year-old daughter has frequently said she loves being called “Daddy’s Girl”. Last week, Suhana, who is an acting student at New York University, addressed the issue of ‘colourism’ head on in an Instagram post (she has 1.1 million followers). She wrote about her own experience of being called ugly at age 12, and more recently, with trolls who taunted her with nasty ‘kaali billi’ tags.

While a section of social media hailed her for raising a sensitive issue, others trolled her for her stand, pointing out that her father endorses a fairness cream! This is the real dilemma faced by children of incredibly popular, iconic personalities, like SRK. If they decide to walk an independent path, they risk being mocked, and if they choose to remain in the shadows, they are laughed at even more for “doing nothing with their lives”.

Suhana is no stranger to the double-edged sword that dangles over her. It started when she was featured on the cover of Vogue (India) at age 18. What Vogue considered a ‘scoop’ was dismissed as a gimmick by critics who pointed out the obvious—what had Suhana done with her life to merit a prestigious cover? Subsequently, Suhana’s parents may have advised her to lie low and focus on her studies. Clearly, with her latest post, Suhana has jumped back in and her views are being avidly discussed. If a superstar’s daughter has been a victim of ‘colourism’ in a country obsessed with fair skin, one shudders to imagine what it must be like for millions of other ‘dusky’ young girls.

Suhana belongs to Gen Z. These are kids who take their individuality seriously and are known to speak up on issues they consider important. Suhana has called out those who cruelly discriminate against individuals based on their skin colour. By raising her voice, she has also demonstrated her willingness to go beyond being seen as a pampered star kid. 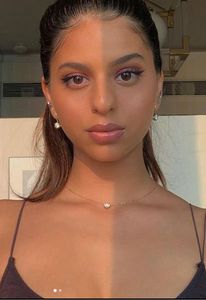 She has been born under a spotlight, and will have to live with constant public scrutiny. She describes herself unselfconsciously as a ‘future star’! Not a ‘future actor’—which is very different. With two good looking brothers (Aryan and AbRam) and a high-profile designer mother (Gauri Khan), her life seems prescribed and unbelievably privileged. After all, SRK ranks among the richest stars in the world. Her brother Aryan is being groomed for superstardom, while little AbRam already has a considerable fan following at age 7. All three children must know their destiny as celebrities to Gen Next.

On Gandhi Jayanti, Suhana and AbRam featured in their father’s social media post, recreating the famous three monkeys pose with another person. Even that well-intentioned post was dissected and critiqued by trolls, with a Sayani Gupta (actor) asking SRK to speak up for the truth and not just shut “your ears and eyes and mouths”. This may be the first time that a very junior female star has dared to take on SRK and his family. It will be interesting to see how Suhana responds not just to this jibe, but to what may follow.

It was bold and brave of Suhana to put herself out there with the ‘kaali billi’ post. It must have resonated with countless young girls and boys dealing with an unfair ‘fairness complex’, even within their own families. At the end of the day, she is just another 20-year-old, grappling with issues of identity and confidence. When she disarmingly says, “I have crooked fingers’’ in a promotional video, one can perceive her vulnerability, which makes her seem like any other girl—funny, awkward, defensive, appealing.

Now that she has raised the banner of ‘colourism’, it is time to take Suhana Khan more seriously. When will we ever wake up to a ‘colour blind’ India?