During this most challenging test faced by humanity, what has kept our spirits and hopes going is the incredible courage and commitment displayed by the medical fraternity across the world. But let me stick to the India story. Ever since the outbreak, doctors and support teams across our country have swiftly and willingly mobilised to contain the spread of Covid-19.

On a personal note, I met two dynamic, well-spoken municipal doctors who came to check on my daughter who had returned from London on March 13. Their questions and systematic documentation made me marvel at the admirable job they were doing, at great personal risk to themselves. The lady doctors patiently took us through the various steps to be followed during the mandatory quarantine period, after which their assistants stamped my daughter’s wrist with the appropriate date. At all times, the team was proactive and patient, while taking us through the seriousness of the unfolding situation.

A follow-up team showed up two days later, and they were equally meticulous. We got chatting and they told me how they were working round-the-clock in three shifts, barely getting to rest or eat a proper meal. The thick masks were causing discomfort, and their family time was severely curtailed. Despite that, they were cheerfully going about their work and reassuring panic-stricken citizens that if we all pulled together as one, India would be able to halt the march of mass deaths. I was impressed by their fortitude—they were young and had their entire life ahead of them, and yet here they were undertaking house-to-house checks, without once slacking off or being afraid of death. 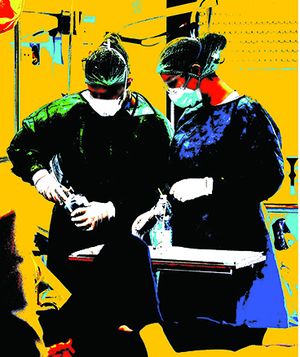 The very next day I received a message from a close friend telling me about her niece who is a junior doctor in a government hospital. I have known the young lady since she was a child and always believed she would make her mother proud, as she most definitely has! Like everybody else in her hospital, she has been putting in 16 hours a day, dealing with overcrowding and more. During the past month, she has been home just twice, and that, too, because she needed fresh clothes. Her anxious mother cannot always reach her, even for a brief daily chat. But there are no feelings of insecurity or resentment. Dealing with an unprecedented situation like this has made her resolve stronger. She has asked her mother not to worry. Yes, the resources are limited and the number of cases has gone up, but the doctors are doing whatever it takes to help the sick.

It made me think of my uncle. He was a much-loved, much-trusted general practitioner in central Mumbai. He had an old-fashioned dispensary, with a compounder who filled glass bottles with mysterious liquids, the dosage marked with a paper strip. I remember his long hours as he met patient after patient, never once displaying anything but respect and regard towards each person. So many of his regulars were underprivileged people from the neighbourhood. The question of charging them fees simply did not arise. Had he been alive today, he would have served in whichever capacity and extended himself all the way in this monumental battle. Just as millions of doctors across India and the world are doing, along with nursing staff, ward boys and others. We owe them a big one.

If, despite my reservations, I clapped at 5pm on March 22, it was because I wanted to demonstrate via a sincere, if very small, gesture how deeply we appreciate the staggering efforts of our medical fraternity to keep us safe. Let us hope this terrible crisis acts as a wake-up call and the government steps up its public health programmes on a war-footing. The Kerala model is the best way forward. Let us adopt it across states, and not place the entire burden of health care on our underpaid, under-staffed doctors slaving away in under-funded government-run hospitals.