William Hamilton-Dalrymple shares a name with a renowned English surgeon. Both need scalpels for their work. Our Williamji or Dalrymplesaab uses words as dexterously as the surgeon uses his medical tool. He is a pucca Dilliwala ‘burra sahib’, albeit with a marked Scottish accent. His late father, Sir Hew Hamilton-Dalrymple, was the tenth baronet. William’s older brother inherited the title, while William wrote, travelled, photographed, won awards, raised goats and children—all at a furious and astonishing pace. As co-director of the ‘Greatest Literary Show on Earth’—the Jaipur Literature Festival—he brings a unique energy to all he does. As a historian and academic, one would imagine he is ready to slow down. Not this man. At 54, with three grownup children, a beautiful painter wife, Olivia, and an almost unreal life at their farmhouse in Mehrauli, outside Delhi, William plays the part of a benevolent ‘White Mughal’ to perfection, swanning around in Pathani pajamas, loose, flowing kurtas, a gorgeous Kani flung carelessly over his shoulders. William is a performer. A man who reads his audience well, and plays to the galleries when the need arises. Through all that bluster and hearty laughs, ticks an amazing brain, acutely tuned in to all that surrounds him. But given his Scottish blood, the one thing William understands best is the power of money. 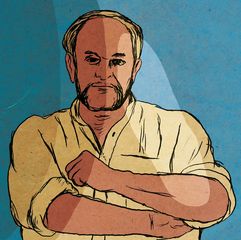 His latest venture is a ‘Ganga Experience’ in Varanasi, with each participant shelling out £5,000 (gulp!) to get a distinctive perspective, curated and presented by William. When we met at the elegant Penguin Books party in Jaipur, I teased him about turning into a posh tourist guide. As always, he had an entourage of fawning fans mobbing him at the JLF, with his latest book, The Anarchy, flying off the shelves worldwide. His travels for each book are meticulously planned and documented and serve up rich detail and imagery. But it is when he does dramatised readings from his textured and eloquent writings, that even those who do not read his hefty historical accounts get drawn into the narrative. Simply but cleverly staged, with live music, appropriate miniatures and expensive carpets, the presentation invariably leaves audiences begging for more. I saw that in Adelaide, with invitees hanging on to every precious line. It is rare to come across as prodigious a writer, finding the time and possessing the talent to pull off a full on stage show!

Over the years, I have started to decode and accept William a little better than the first time we met over 30 years ago. That was a bit of a disaster! He was assigned by The Sunday Times (London) to write my profile and spend a week in my company, observing my life. Terrible idea! William was hopelessly distracted—he was on his honeymoon, and could not bear to stay away for too long from Olivia. They were staying at the Taj Mahal Palace Hotel, near my home, and he was in a tearing hurry to wrap up the assignment and get back to the inviting swimming pool. The loss, alas, was mine. But that is history. I have moved on. The William of today is a different animal—fun, irreverent, witty and, yes, less savage!

Recently, we spent a mellow evening at an impromptu after-party, post the concluding session of the JLF at Doha. A few of us had gathered—hungrily and thirstily in one of the suites well past midnight. There was greasy, over-priced Chinese takeaway food on the table, but mercifully the wine was top- class. We were joined by the fabulous Kutle Khan Project singers, who had closed the first edition of the lit fest with a rousing performance that had people dancing in the aisles. What followed in the suite was a relaxed mehfil, with everyone joining Kutle Khan as he sang ‘Mast Kalandar’. William was seated on the floor, and doing what he does so well these days—documenting every magical moment on camera. Yes, he was still working!