Didi is NaMo in drag

She is something else, our Mamata Banerjee—the woman who would be prime minister. What is the first word that comes to voters’ minds when one says ‘West Bengal’? Violence! And, violence it was that disrupted the fifth phase of the ongoing Lok Sabha elections when seven of the state’s 42 seats with 83 candidates and 1.17 crore voters went to the polls. Despite the heat, the state saw a 74.42 per cent turnout, which is far better than Maharashtra’s 57.32 per cent. High drama was expected in Didi’s state, and high drama is what we saw, complete with booth capturing and skirmishes galore. Cadres of her party—the Trinamool Congress—are known for their aggression, and anybody who has encountered members of Didi’s squad in Kolkata will uneasily narrate the ordeal of having to deal with them. This is what’s called ‘Didi Style’. Nobody wants to mess with the fierce chief minister of West Bengal—the woman who seems confident of displacing Narendra Modi as prime minister. God help us all if such a calamity does indeed take place. For, Mamata is Modi’s alter ego. NaMo in drag!

What astonishes me (being an honorary Bong through marriage) is how meekly Kolkata’s boxwallas have surrendered to Didi’s diktats. Those stuffed shirts and starched tangails are not known to put up with bullying. But such is Didi’s control, nobody dares to utter her name in vain. Didi has effectively silenced and browbeaten any opposition to her policies—jailing critics and journalists, and making it abundantly clear that she will hit back at anybody who refuses to toe her line. Compared to Didi, even a woman as ferocious as Mayawati appears mild-mannered and likeable. That’s saying a lot! 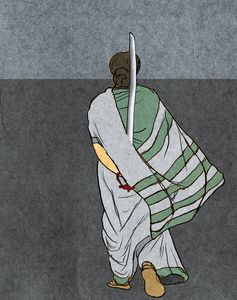 Whatever happens on May 23, the red-letter day when citizens will know the poll results, one thing is for sure: both these ladies will play a pivotal role in India’s future. I have no problem with assertive women, but I do have a problem with bullies, men or women. Mayawati and Mamata are bullies of the worst kind. Had Mamata established her credentials as an able administrator and attracted investment to her state, her bullying would have been viewed differently. But apart from cosmetic changes in Kolkata and a much-needed cleanup drive, Mamata hasn’t exactly covered herself in glory. The bhadralok shudder at the prospect of being in the same room as Didi. She, in turn, has utmost contempt for the decadent, over-privileged snobs who look down on the unwashed masses, preferring to stick to their own. Today, the snobs are pushed to the edge of society by the brash new breed surrounding Mamata.

I had spent an entire day with Didi while she campaigned in and around Kolkata. That was a long time ago. My experience back then had been pretty positive! I was told to sit in the backseat with her loyal supporter, while she sat next to the driver of her Omni, talking nonstop in her, by now familiar, high-pitched voice. She struck me as being a woman on a mission, with a one-point programme—herself! She was out to win, at whatever cost. Nothing wrong with that! Which politician jumps into politics to lose? Mamata was a woman possessed. And that’s how she remains. I thoroughly enjoyed watching her work the crowds, as we drove through lush, green hamlets, with bedraggled villagers cheering her. She spoke at me, not to me, rarely bothering with eye contact. A couple of times, she insisted on my being on a makeshift stage with her, as she harangued the motley bunch of sweaty volunteers to gather bigger crowds at the next stop.

Mamata is not a kingmaker; she is the king! If any ally is harbouring illusions of getting her support to form the next government without Didi extracting several pounds of flesh, forget it. The only way is her way, or the highway. I am looking forward to the fireworks!