Bangladesh entered the fiftieth year of its liberation and creation registering the highest rates of national income growth among all south Asian economies. For a country that was regarded as the region’s basket case at its birth, Bangladesh has travelled a great distance. On the United Nation’s Human Development Index (HDI) Bangladesh is ranked 133 in 2020, just two steps behind India, and 20 steps ahead of Pakistan. This impressive performance is not statistical.

Over the half century of a troubled existence, Bangladesh has managed to industrialise and invest in its human capabilities. Western multinationals, seeking to relocate out of China as they reconfigure their global supply chains, are increasingly looking at Bangladesh as a hospitable host country. An important factor that has shaped Bangladesh’s post-liberation developmental journey has been its own “Look East” and “Act East” policy. With this the south Asian nation is increasingly behaving like a south-east Asian one. 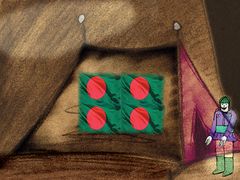 Japan’s former prime minister Junichiro Koizumi once famously described India as being at the centre of a vast continent with a very different Asia on either side. To India’s west is a politically unstable Asia, remarked Koizumi, to India’s east is an ‘increasingly prosperous’ Asia. In which direction is India headed? That seemed to be Koizumi’s implied question.

Bangladesh has so far addressed that question quite convincingly. It seeks inspiration from its south-east Asian neighbours, establishing beneficial economic links with China and the Association of South-east Asian Nations (ASEAN). It is also increasingly receptive to Indian and Pakistani investors. Indian investments have been steadily rising, in part to take advantage of Bangladesh’s export quotas and in part because of a more hospitable business environment.

As a member of the regional grouping BIMSTEC (Bay of Bengal Initiative for Multi-Sectoral Technical and Economic Cooperation), Bangladesh was viewed as a likely bridge between south and south-east Asia, but it is a bridge that looks more longingly to its east. I would not be surprised if at some point Bangladesh seeks closer engagement with ASEAN, even membership, given the slow demise of the South Asian Association for Regional Cooperation (SAARC), an organisation that was in fact a Bangladeshi brainchild.

The challenge to Bangladesh’s steady rise comes largely from homegrown religious radicalism, partly stoked by external inspiration and support. The recent military coup in Myanmar and the enduring presence of the military in Thailand should act as reminders to Bangladesh’s democratic forces that a retreat from hard won democratic freedoms is an ever-present possibility. Prime Minister Sheikh Hasina has unequivocally condemned the coup in Myanmar and has been able to keep the military at home under tight leash.

Religious extremism, cutting across all regionally prevalent religions, is a more widespread regional phenomenon in evidence from west Asia into south-east Asia. India was grappling only with Islamic extremism till a decade ago and is now also dealing with the challenge of Hindu majoritarianism. Hasina has partially succeeded in recovering for Bangladesh its original secular identity. However, given the growing influence of religion on politics in most neighbouring countries, it remains to be seen how long Bangladesh can keep radical religious elements out of key institutions.

Bangladesh’s recent success as a nation, and as an economy, holds many lessons not just for Pakistan, the parent country that it left behind in more senses than one, but for all regional countries. It shows the benefits of pursuing liberal economics and politics with a modern and forward-looking national elite and political leadership.